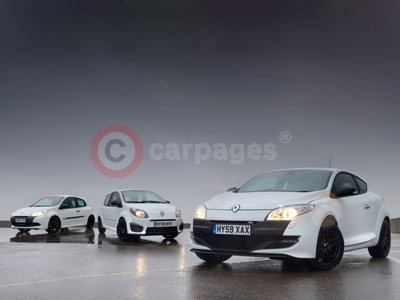 Renaultsport has taken a hot-hatch hat-trick at this year's What Car? Awards, the glittering ceremony held this evening at the Grosvenor House Hotel in London. In an unprecedented result in the prestigious 'Best Hot Hatch' category, all three price categories were won by the French brand's iconic performance arm.

What Car? judges praised the seductive style of the Renault Megane and, most importantly, the driving experience, commenting that it's "an impossibly seductive driving machine" and that the car "instantly reacquaints you with the joy of driving."

Steve Fowler, Group Editor of What Car? commented, "We've never had one car maker dominate the hot hatch category like this before, but it's no real surprise as we've had so much fun testing hot Renault's over the past twelve months. The Twingo and the Clio came close to taking the overall award, but the Megane steals the show - it's got the power, poise and panache a hot hatch needs, plus a dose of civility so it's easy to use everyday. And we love those yellow seat belts!"

Receiving the award, Remi Deconinck, Managing Director of Renault Sport Technologies said, "To win all three Hot Hatch awards from such a prestigious magazine as What Car? is a terrific honour for Renaultsport and I am delighted and proud to accept this award on behalf of the team that created the cars. Our philosophy is to provide affordable driving pleasure for all, and these awards vindicate our approach."

Steve Marvin, Chief Vehicle Engineer for Renault Sport Technologies, said, "The overall result for the Megane Renaultsport is a fantastic reward for the design and development team. Our intention is always to make a great driver's car through advanced engineering and we are honoured that What Car? judge it so highly."

The awards top a vintage year for Renaultsport. The last 12 months have seen the introduction of the pocket-rocket Renault Twingo Renaultsport 133 Cup, Renault Clio Renaultsport 200 and, now, the stunning Renault Megane Renaultsport 250, all to critical acclaim.