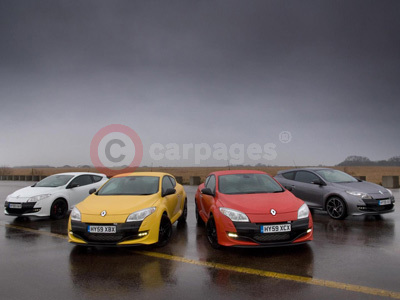 After driving away with an unprecedented hot-hatch triple win at last year's What Car? Awards, including Best Hot Hatch, Renault is enjoying the spoils once more, after achieving the same impressive feat in 2011.

In spite of a series of new and revised pretenders to the crown in each of the three Hot Hatch price categories, Renault's pocket-rockets swept the board.

Topping the bill yet again was Renaultsport's finest, the Renault Megane Renaultsport 250 Cup. Renault's performance flagship not only stormed to victory in the over £20,000 group, it also held off a series of high-performance challengers who could not wrestle away its hard-earned 'Best Hot Hatch' title for the second year running.

Its smaller, but equally desirable and impressive handling brother, Renault Clio Renaultsport 200 Cup, triumphed yet again in the £15,000 to £20,000 section, with the baby of the trio, Renault Twingo Renaultsport 133 Cup, leaving the opposition trailing in its wake in the under £15,000 category.

Steve Fowler, Editor-in-chief of What Car? commented, "This is the second year running that Renault has dominated the hot hatch category at our Awards and the second year running that the Megane Renaultsport 250 Cup has won our Best Hot Hatch Award. Renault clearly knows a thing or two about putting smiles on our faces with a range of thrilling hot hatches that are great fun and well priced. The best of the bunch, the Megane, has that rare blend of talents that make it a true hot hatch great."

Receiving the company's first, but hopefully not last, award of 2011, Thierry Sybord, Renault UK's Managing Director said, "I'm honoured to be accepting this latest award for our performance division, Renaultsport. They have worked tirelessly in recent years to hone every aspect of the driving experience in each of our hot hatches and I'm delighted that their efforts continue to be acknowledged by our customers, the media and prestigious awards such as these."