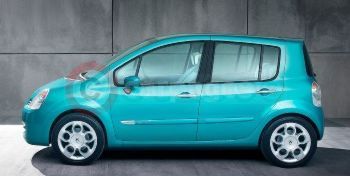 For the first time ever, a new Renault production car will make its world debut at the British Motor Show at Birmingham NEC in May 2004 before going on sale in September.

The launch of the Modus super-spacious supermini is an additional model in the extensive Renault range, sitting between Clio and Mégane – two models that have helped push Renault to record sales and a place in the UK top three last year for the first time.

The smart design of Modus epitomises the company’s emphasis on style and driving pleasure, which given its compact dimensions and large car refinement, should ensure that the model is equally at home both on long journeys and jaunts around town.

Modus is ‘the small car with a big heart’ and has been specifically designed as a five-door only hatchback. Although compact on the outside, the feeling of space inside its light and airy interior truly belie its diminuitive dimensions. At 1589mm tall, 3792mm long and 1709mm wide, Modus is 172mm taller and 70mm wider than a Clio. Particular attention has been paid to materials and textiles on the new car to enhance the feeling of comfort and softness, such as the leather-covered instrument panel and soft-touch paint finish on the central façade.

Modus will also set a new benchmark for a small 5-door hatchback with its advanced technology features, including "cornering" front headlights and a "Triptic" rear seat bench offering an extremely versatile seating layout. Other notable innovations include a split-opening tailgate which can be opened as a complete door as normal, or alternatively just the lower half – reminiscent of the original Mini - which is hinged at the bottom to rest loads on if necessary and also allows easy boot opening in confined spaces. There is also the option of "Velofix" – a cycle rack system whose attachment system is built into the rear bumper and chassis.