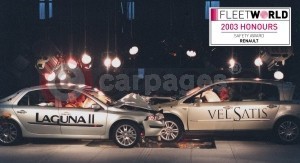 Renault picked up two major prizes at the 2003 Fleet World Awards held in London on Wednesday 14 May 2003. Fleet World Magazine voted Renault best for safety for a second consecutive year following the addition of the New Mégane and Vel Satis to its stable of EuroNCAP Five-Star cars, while Commercial Fleet World Magazine chose the Renault Trafic Van as Best Medium Van.

Now the manufacturer with the largest number of EuroNCAP five-star cars in its range -following the success of the New Mégane and Vel Satis in the crash tests late last year - Renault was chosen by Fleet World Magazine to receive its Safety Award for a second consecutive year.