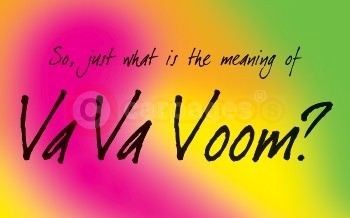 When Hélène Mahieu uttered the immortal phrase 'Va Va Voom' back in 1998 whilst launching the Clio Renaultsport 172 in a new advertising campaign, Renault had no idea it had introduced a phrase that has become so popular the Concise Oxford English Dictionary has just announced it will now grace the pages of its 11th edition!

Since 2001, international footballer Thierry Henry has put himself in the driving seat of the new Clio on a quest to find out what the meaning of Va Va Voom actually is. Although the Concise Oxford English Dictionary has defined the term as ' the quality of being exciting, vigorous and sexually attractive'.

However as Chris White, Manager, Marketing Communications at Renault UK explained; "We're delighted Va Va Voom has become such a well known phrase that it has been entered in the Concise Oxford English Dictionary, and are thrilled the Renault Clio campaign has contributed to its popularity but, at the same time we're intrigued with the definition it has been given as we do not think you can define Va Va Voom. We prefer instead to let our customers make up their own minds seeing it almost as the English language version of 'je ne sais quoi'!"

The 'Va Va Voom' advertising campaign was created by Publicis on behalf of Renault and has been running for six years. The latest advert which is currently on air, is set in an ultra hip jazz club and showcases the new Clio Renaultsport 182 with its Variable Valve Timing (VVT) engine.

Cool, funky and fun, the suave and sophisticated Frenchman Thierry Henry shows that Clio appeals to all ages and both sexes, especially the sporty versions. The current advert sees him teamed with Animal, arguably the coolest Muppet from the Muppet Show which again epitomises the 'Va Va Voom' Clio offers.

The popularity of Va Va Voom certainly matches the popularity of Clio with sales having recently reached more than 750,000 after 13 years on sale. On the road prices for Clio start at £7,875.

Renault looks forward to bringing more catchy phrases packed with its own Va Va Voom for popular use in the near future and maybe even create a whole dictionary of its own!