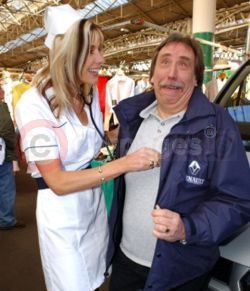 According to a nationwide Renault Vans survey, 'executive stress' isn't just saved for the boardroom, it also exists behind the wheel of a 'white van'. One of the UK's hardest working groups - our 'white van men' - are not taking enough care of themselves with half of them working more than five days per week, most having no time to stop for lunch, most suffering from back ache and all are stressed by their jobs. Most worrying of all, 46% of van drivers never get their eyesight checked even though 39% of them wear glasses.

As we all know, it's the UK's white van men help keep this country going through the important jobs they do so it's essential they take better care of their health. Renault aims to help van drivers with a series of nine roadshows around the UK where they can get a free health check with the Renault Health Squad, which includes a physiotherapist, fitness advisor and nutritionist plus experts from BUPA and Vision Express.

Sandy MacRitchie, Brand Manager of Renault Vans said: "We pride ourselves on the fact that Renault Vans Run and Run and Run, and now we want to make sure that our customers do too!"

"That’s why we’ve devised the Renault Vandurance Roadshow, to take care of the country's van drivers and give them more OOmph. We’ve put together our very own health squad including experts from BUPA and Vision Express to help busy drivers tackle the health problems our survey has highlighted."

With Sharron Davies and ex-England captain Stuart Pearce, the Renault Vandurance roadshow will be taking to the road this summer offering a free health check, advice and a simple sight check to van drivers in nine UK cities. The roadshows will also have an interactive area which will test Body Mass Index (BMI), eyesight, reflexes, hand/eye co-ordination and strength.

"I’m delighted that Renault Vans are supporting drivers health" Sharron Davies said. "Having looked at the survey results it is clear that van drivers are under a lot of pressure and don’t always have the time to look after themselves properly."