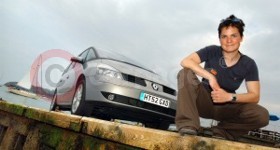 Sunday 20 July - British Grand Prix, Silverstone – Renault UK, with the help of Renault F1 Team drivers Jarno Trulli and Fernando Alonso, announced that it has signed a partnership agreement with the round the world yachtswoman Ellen MacArthur - who shot to fame in 2001 after completing the world’s toughest race, the Vendée Globe - for the supply of vehicles to her Offshore Challenges racing team.

Appropriately, the British Grand Prix and the Renault F1 team garage was the venue for the announcement as Formula One racing and top level sailing now share much of the same technologies and certainly the same spirit of adventure and innovation.

And hence the reason why Renault, as a company that champions innovative design and engineering and has taken risks and pushed the design boundaries in recent years with Espace, Scenic, New Megane, Vel Satis and the award-winning Trafic van, is delighted to provide support to Ellen, and her fellow sailors, Nick Moloney and Samantha Davies.

Ellen, Nick and Sam will drive the New Renault Espace 3.0 V6 dCi launched this year to much critical acclaim as the first ever six cylinder powered luxury MPV and which recently hit the headlines for achieving the highest score ever in the EuroNCAP crash tests. This makes New Espace the safest car on the roads from over 160 that have now been tested by the independent organisation. The Offshore Challenges racers will also have a Trafic van which will be used to support Sam in her 2003 Skandia sponsored Figaro campaign in which she is the first British woman entry for 25 years since sailor turned author Clare Francis competed in the Solitaire du Figaro race.