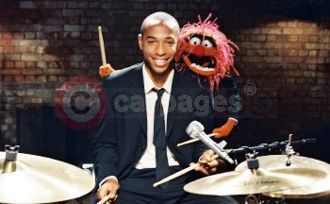 It’s a brave person who would tell footballer Thierry Henry that it was ‘time to put on make up’ and ‘play the music’, but the launch of Renault UK’s new Clio advertisement sees Thierry Henry return for the second time, with a new co-star who has plenty of ‘Va Va Voom’ - Animal from The Muppet Show.

Exclusive preview of Clio Renaultsport 182 on the internet

For the first time ever, Renault will give an exclusive sneak preview of the commercial online at www.renault.co.uk from Monday 3 November. It will then show in cinemas from mid-November before being shown on TV screens in December. It also previews the new 2004 year Clio range and specifically, the new Clio Renaultsport 182 which gains, amongst other things, an extra 10 horsepower over its predecessor.

The ad was shot mainly in black and white and is set in an ultra-cool jazz club, where the sounds of the trumpets echo the variable valve timing (VVT) of the Clio Renaultsport 182’s engine, although the new ad showcases Renault Clio range as a whole.

Has the Frenchman got a new talent as a drummer?

At first it appears the suave and sophisticated Frenchman is on stage playing drums with his jazz band and entertaining the crowd with his impressive drumming skills. Just as Thierry is about to launch into a complicated drumming solo, the camera pans round to reveal it’s Animal who is actually responsible for the rhythmic sounds, not Thierry. As usual the Frenchman takes it in his stride, with a Gallic shrug of the shoulders.

Olivier Généreux, Director of Marketing at Renault UK, said "Thierry Henry is the epitome of what the Clio represents – he’s cool and gives the car a masculine appeal which keeps it fresh, young and funky. Added to that, the new ad provides a touch of unexpected in the plot, which is in line with our strategy of creating imaginative advertising that often contains a twist, especially in Clio ads.

"The appearance of Animal provides the ‘unexpected’, and definitely adds to the overall appeal of the ad. We needed a well-known drummer for the twist in the ad, and Animal was the perfect choice as he’s a bit of a rebel.

On meeting Animal, Thierry Henry said: "I’ve always shown animal instincts for getting the ball in the back of the net and it’s fair to say, I’ve even played with some animals in my time. So meeting the real ‘Animal’ and seeing him play the drums was an experience to remember. He was very pleasant and didn’t seem to need to be chained to the wall. But with my insurance we couldn’t take any risks. I would definitely say Animal, like the new Clio, has va va voom."

Animal was unavailable for comment but Renault has it on good authority that Animal thinks Thierry should not give up his ‘day job’ just yet.

Behind the scenes footage from the first Va Va Voom commercial and more tips from Thierry Henry on what has Va Va Voom can be found online at www.vavavoom.co.uk