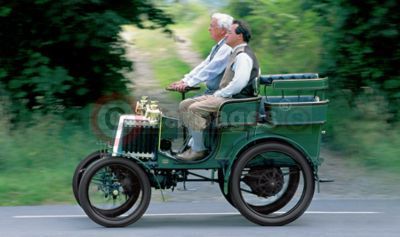 Renault UK celebrates its 100th anniversary in style on Sunday, 7th November, as a major partner in the 2004 staging of the annual London to Brighton Veteran Car Run.

Renault is proud and delighted to have a total of 21 historic cars entered in the London to Brighton Run, giving the manufacturer the largest number of entries in, what is, the world’s longest-running classic motoring showpiece.

Coming from private owners, the Automobile Association and Renault UK itself, the Renault cars taking part date from the early years of the 20th Century and illustrate the phenomenal heritage enjoyed by the French marque.

In addition to the historical element of the event, Renault’s presence will also be seen through a fleet of its current road cars, as the manufacturer will supply all the Run’s official vehicles including Espace and Vel Satis course cars. In total, the London to Brighton Run will feature over 400 veterans and nearly all will be at least 100 years old for the first time in the history of the event.

Among them will be Renault UK’s own 1900 C-Type in the capable hands of former long-standing employee and current custodian of the car Jim Worsley.

"There’s something about the London to Brighton Run which is so magical, even when it rains which is unfortunately quite common", he commented. "It’s a fabulous event and one-of-a-kind. I’m delighted to be taking part with Renault and it’s a very important way of celebrating the company’s 100th anniversary.

Worsley added: "The 1900 C-Type is a very important car in Renault’s history and it’s been used in the London to Brighton Run since 1972. It’s a fantastic car and a true favourite with the spectators. With so many Renaults taking part, this year’s event really does promise to be the best ever and I’m very much looking forward to it."