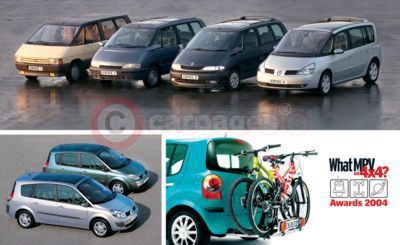 Things just keep getting better and better for Renault in the UK this year. The company is witnessing strong fleet and diesel sales across its diverse product range, critical acclaim from the Press and public alike for its three Renaultsport models, the new Modus is literally flying out of showrooms since its launch earlier this month and now it looks like Renault are going to need yet another trophy cabinet to accommodate a new batch of awards, this time from What MPV and 4x4? magazine!

Renault UK already has an impressive haul of twelve awards so far this year for its car and LCV range, but now adds three more honours from What MPV and 4x4? magazine’s first-ever awards, to be published in its October issue. Renault has scooped more awards than any other car manufacturer with MPV Manufacturer of the Year, Lifetime Achievement Award for Espace and Innovation of the Year for Modus’ bike rack.

Applauding Renault’s resounding success at What MPV and 4x4?’s first-ever awards, What MPV and 4x4? Editor, Bob Murray said: "Where MPVs are concerned, Renault are one step ahead of the rest. Knowing what MPV buyers want has led to outstanding design and safety, and the most complete and desirable range of MPVs on sale today. Renault are worthy winners of the first MPV Manufacturer of the Year Award."

The influential magazine goes on to praise Renault’s outstanding safety record with its seven models with five-star Euro NCAP crash test ratings, its range of class-leading dCi engines, the recent introduction of the seven-seater Grand Scenic and Modus supermini plus innovative features such as panoramic sunroofs and keyless entry systems.