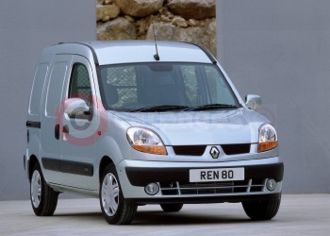 Kangoo's many innovative features such as the folding front passenger seat and hinged bulkhead and the availability of side load doors as well as its recent facelift all contributed to the vehicle picking up the award for Commercial Fleet World's 'Best light Van'.

Commercial Fleet World editor, Gibb Grace comments; "The current models are notable for their attractive, functional styling, improved perceived quality thanks to tighter shut-lines, and better NVH. The mainstay engine for fleet work is the 1.5-litre common rail diesel which is available at 57, 65 and 80PS and NVH has been improved by the use of a new subframe and stiffer engine mounts, and in the case of the 80PS version, by the use of a dual mass flywheel. It is hardly surprising then, that given a combination of gross payload ratings of 600 and 800 within gross weights of 1675 and 1875kg, a 3m3 loadspace, first class access and excellent fuel consumption that Kangoo is so popular with fleets."

Renault Kangoo shares this award and the above praise with its sister product the Nissan Kubistar.

For the second year in a row, Renault Trafic - code named X83 - has won Commercial Fleet World's Best Medium Van picking up its own individual certificate.

Gibb Grace, Commercial Fleet World Editor, saud; "Medium vans have improved dramatically over the last five years, and set the overall LCV benchmark in terms of driver appeal with their outstanding ride and handling, driveability, refinement, not to mention feature level. The sector is hotly contested by four leading designs, but the X83 trio of Renault Trafic, Vauxhall Vivaro and Nissan Primastar has retained its edge and takes the award.

"X83 is a rare example of how co-operation and good planning can pay off. The programme was initiated by Renault who did the design work and General Motors Europe who took responsibility for production at the IBC plant in Luton. Later, Renault and its Alliance Partner Nissan invested a further 250 million in Nissan’s Barcelona plant, raising annual capacity from 86,000 to 150,000 units. Today, the range offers short and long wheelbase vans and buses at 2.7 and 2.9 tonnes gross, with power options of 82, 100PS (1.9-litre) and 135PS (2.5-litre). Both engines use common rail fuel injection, but whereas the 1.9-litre diesel is a single overhead, eight valve design, the 2.5-litre has double overhead cams driving 16 valves. In short, X83 is a well-engineered, quality product that not only delivers, but does so with flair".
Published : 12/05/04 Author : Melanie Carter

Renault Kangoo Images may not be UK specification cars. Colours and exterior and/or interior elements may differ from actual models.