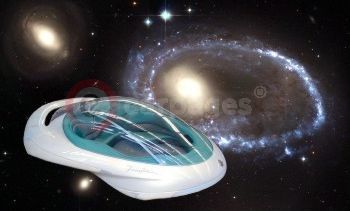 Renault’s striking ‘Reinastella’ concept vehicle will form an integral part of the Cartier Style et Luxe display at the Goodwood Festival of Speed which takes place on 25th/26th/27th June.

Created back in 1992 by the imaginative Renault design team based in Paris, Reinastella was first unveiled to the public on 2nd April that year on the Champs-Elysees at the permanent Renault exhibition showroom.

Originally, Renault decided not to display Reinastella on 1st April in case Parisians judged the concept to be an ‘Avril Poisson’ – the French term for April Fool!

Reinastella was designed with the intention of showing how personal transport might appear in the year 2038 and was physically created following Renault’s decision to become involved with the world-famous Euro Disney theme park.

The concept formed an important part of the attraction’s Visonarium 360 degree cinema trip through the centuries and at Goodwood this year, the astounding 12-year-old concept will undoubtedly turn heads once more and prove to be one of the most major talking points of the entire three-day festival.

While Reinastella will be the centre-piece of a space-scape built to house the ‘Future Cars’ display in the Cartier Style et Luxe area, the event will also feature separate displays of the Renaultsport brand of roadcars - including the Clio 182, Clio V6 255 and Megane 225 – a current R24 Formula One car and also a celebration of the 20th anniversary of the much-loved MPV Renault Espace.