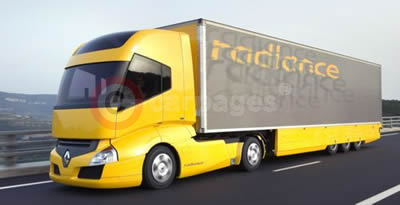 Renault’s reputation for producing striking and innovative car designs is well documented and the latest Trafic, Master and Kangoo vans prove that commercial vehicles don’t have to be dull. But now things have got a whole lot bigger as top Renault designer Patrick Le Quément and his team are now set to do the same for the truck world with the unveiling of a new concept ‘dream truck’, Radiance.

This new landmark truck joins an impressive stable of other mould-breaking concepts from the industry’s most daring manufacturer, including the two most recent concept cars, the luxury sports coupé, Fluence and 2+1 sports car, Wind.

Produced by Renault’s Corporate Design Department, based at the company’s state-of- the-art industrial complex, Technocentre, just outside Paris, Radiance’s evolutionary design was developed in conjunction with a Renault Trucks team led by Xavier Allard, Director of Engines and Parts Design, using digital development software and the simple philosophy: "Drive like a car, work like an office, live as you would at home."

In terms of exterior design, while Radiance shares some obvious design cues with its more mainstream siblings, the first thing which strikes you about it is its sleek, aerodynamic and modern shape which defies traditional, box-style truck design.

Moving from the front to the rear of the new ‘dream truck’, the visionary front end includes large air inlets to give extra engine cooling and foldaway steps which still allow easy cabin access but don’t interfere with the truck’s curvaceous lines. In keeping with Radiance’s futuristic lines, two exterior cameras are mounted on the cab’s aerofoil which eliminate all blind spots and give superior visibility, while the modern front headlights which have a hint of Espace about them, are multi-directional so that they can be adapted to specific driving conditions, including city, fog and motorway mode.

To maintain the truck’s streamlined design, at the rear of the cab, Renault has created an ingenious aluminium connecting unit for the electrical and tyre cables which fit to the trailer, which with its retractable cables, works in a similar way to a modern vacuum cleaner’s power cable so that no ugly cables can detract from the vehicle’s modern looks.

Completing Radiance’s striking profile, the cab’s rear brake lights have an air of Mégane Coupé-Cabriolet about them, but with the added bonus of producing varying degrees of red light depending on the level of force applied to the brake pedal.