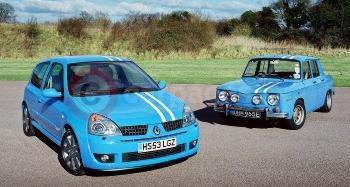 This year marks the 40th anniversary of the debut of the Renault 8 Gordini racing and road car which was the high performance equivalent of today’s Renaultsport cars - built to provide the ultimate in performance and driving pleasure. To pay homage to these remarkable cars, which were distinguished by their bright Racing Blue paintwork and twin white stripes over the top of the car, these two special options are now available on the new Clio Renaultsport 182.

Hailed by the Press as the ultimate hot hatch and winner of many a group test when driving pleasure is what counts, the Clio Renaultsport 182 is a remarkable car and as such a worthy distant successor to the Gordinis of the ‘60s and 70s. The distinctive Racing Blue paintwork is available as a no cost option and only with this colour is the option of twin Competition Stripes over the bonnet, roof and tailgate for £295 to give that Gordini look in 2004.

A Tour de Course winner on its first outing

The Renault 8 Gordini provided dramatic performance in its day, sufficient in fact to win the Tour de Course rally on its first outing. Whilst the standard Renault 8 had a 956cc or 1108cc engine pushing out 48hp the Gordini was powered by a 1255cc engine with nearly twice the power at 95hp. Consequently top speed went up from 81mph to 106mph whilst the standing 0-62mph time nearly halved from 22.3 seconds to only 12.3 seconds

The new Clio Renaultsport 182 clearly upholds the tradition of its stablemate from 40 years earlier. With a 2-litre engine now with an extra 10hp over the 172, the Clio 182 has more than double the power of the 1.2 16V 75hp version which powers a lot of regular Clios. Performance is equally scorching and the Gordini wouldn’t see which way the Clio went. In the Va Va Voom stakes the Renaultsport shows the Gordini the way home with a top speed of 139 mph and 0-62mph acceleration in only 7.1 seconds. That’s 40 years worth of technical improvement for you – and this from a cleaner more economical engine remember.