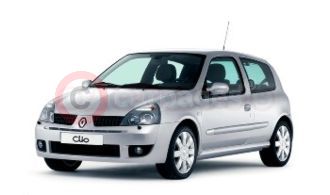 Renault has announced more Va Va Voom for its 2004 Clio range spearheaded by the more powerful Clio Renaultsport 182 and its first sporty diesel supermini - the new 100bhp 1.5dCi. In addition certain models of the Clio 2004 range are freshened up with new front-end design, new interior treatments and optional equipment and is on sale now.

The extra 10hp is available thanks to changes made to the exhaust manifold and catalytic converter, which also improves performance at lower revs and the sound of the engine. Maximum torque of 200Nm is now available from 5250rpm (150rpm earlier than the previous version).

Sounds on the inside of the car are also improved by the addition of a 160W Cabasse six CD/radio, and the inside of the car exudes a sporty feel, with a "Dark grey seaspray" dashboard teamed with perforated alcantara upholstery with a light grey under layer. The safety belts are also light grey, featuring a metallic finish. The vehicle's sporting qualities are also underscored by new satin-finish chrome dashboard mouldings, steering wheel insert and gear lever knob.