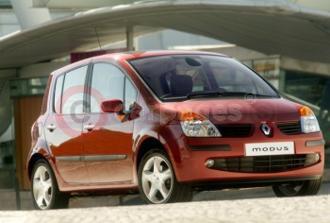 Renault's Modus, debuting at The Sunday Times Motor Show Live, forms the advance guard for a new generation of small cars from the brand.

Emphasising space and versatility the five-door Modus goes on sale this autumn priced at "a few hundred pounds above Clio," according to company sources.

Renault UK's managing director, Philippe Talou-Derible, said that while the Modus established another new niche for the company it would help sustain sale volume before a new Clio range is launched in the final quarter of next year.

The French brand's small car portfolio will be strengthened by the long-awaited arrival of the next generation Twingo, previously unavailable in right hand drive form.

Aimed at rivals like Fiat's Panda, Smart's forfour and the MINI, the Twingo will be “stylish and chic” according to Renault's UK managing director.

Talou-Derible admitted: "There will be some substitution between five-door Clio and Modus but Clio has essentially been a three-door car. That is a legacy of not being able to import Twingo."

UK customers will have access to the Twingo because it will share a common platform with the next Clio and its Nissan Micra corporate cousin, therefore generating economies of scale.

Meanwhile Renault has chosen Britain as the venue for unveiling a significant concept car, a Laguna-sized coupe, codenamed Z16.

The wraps will come off the design exercise next week at the Louis Vuitton concourse d'elegance at Waddestone Manor.

A spokesman for Renault said: "It will be of equal importance to our brand as the Initiale was in the late 1990s. All our concept cars have to work for a living, providing inspiration and elements which find their way into production designs."

Initiale was influential in the styling of the current Laguna, Vel Satis and the discontinued Avantime.