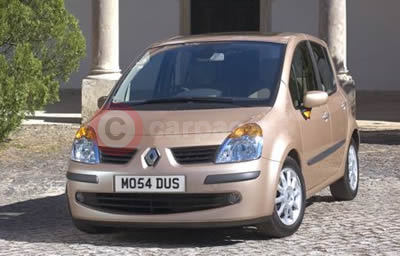 Renault’s new, chic, small car, Modus, has become an instant hit in the UK, taking 3,500 orders since appearing in showrooms a month ago and the initial sales target of 5,000 units covering the last four months of the year already looking like being beaten well ahead of time.

Since appearing in dealerships on 10th September and after receiving innumerable rave reviews from the Press such as, "…one of the cleverest, best designed and most keenly priced cars on the market", and, "Renault’s cheeky supermini sets new standards for small cars…it’s so practical and such fun", Modus, the "small car with a big heart", has literally flown out of Renault’s showrooms the length and breadth of the country.

With its plethora of innovative features including the ‘boot chute’, cornering headlights, ‘Triptic’ rear seat, as well as its extensive range of engines and trim levels, Modus has already become one of Renault’s best-selling new models ever.

And it’s not just Modus which is capturing the UK public’s imagination. In spite of a 2% fall in the September UK car market compared to the same month last year, Renault bucked the trend with an 11% rise in sales.

Thanks to the considerable success of the Megane and Scenic ranges and sales of the company’s class-leading diesels, Renault confirmed its position as the third best-selling car marque in the UK, with sales of 29,671 units (6.89% market share) compared to 26,684 (6.07%) the same time last year.

Renault’s stunning sales performance in September was no coincidence either, as the company continued its phenomenal UK growth of recent years with a near 3% rise in sales for the first nine months of this year in a market which has only grown by just 0.3% so far this year. Renault UK’s sales year to date currently stand at 151,300, compared to 147,368 during the first nine months of 2003.

Commenting on Renault UK’s impressive performance so far this year, Philippe Talou-Derible, Managing Director, said: "As the number one automotive brand in Europe, we’re naturally delighted with our continued success in the UK, one of the company’s most important markets. With the excellent reception that Modus has received, as well as the recent launch of more great products such as the Clio Renaultsport 182 Cup and the latest two-litre turbo versions of the Megane range, we very much look forward to building on our success so far this year with a fantastic last quarter."