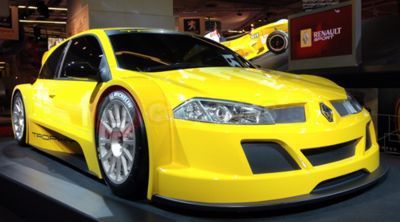 Renault has released official pictures of its awesome Megane Renaultsport Trophy racer following the car’s recent debut at the Paris Motor Show. Although motorists will not see the show-stealing 320hp Megane Trophy on the road, the car will be racing throughout Europe - including visiting the UK - next year.

With styling based on the powerful Megane Renaultsport 225, the Megane Trophy race car will compete in its own one-make championship covering eight European race meetings beginning next Spring. Approximately 30 Megane Trophy racers will take part in the series on tracks in the UK, France, Germany, Italy, Spain, Portugal, the Netherlands and Belgium.

The UK race will be on Sunday 11th September 2005 at Donington Park in Leicestershire.

The full Megane Trophy calendar will be unveiled this month following publication of the F1, MotoGP and WRC schedules.

Renaultsport’s latest offering has taken the already powerful and impressive Megane Renaultsport 225 and evolved it into the Trophy race car with a tubular chassis, mid-mounted V6 powerplant and semi-automatic gearbox. Its bodywork has been lowered by a full 10 centimetres, with widened wheel arches and added rear diffuser, all combining to give the 155mph-plus Megane Trophy awe-inspiring looks and ensure it is a top level-racing machine.

The 3.5-litre V6 engine fitted to Renault’s Espace and Vel Satis powers the Megane Trophy but in this case, the unit develops more than 320hp and features semi dry sump lubrication.

The Megane Trophy’s electronic control system is by Magneti-Marelli and covers all engine, gearbox and automatic clutch management functions plus the data acquisition that is so essential for drivers and engineers to unleash every fraction of the car’s performance. Enhanced driveability comes from specially-designed Michelin tyres, with stopping power courtesy of ventilated discs with six-pot callipers’ front and four-pot at the rear.

In dynamic terms, the Megane Trophy is comparable to some GT racers thanks to its strong power-to-weight ratio and wind tunnel-developed aerodynamics.

The Megane Trophy will be given an initial shakedown at the end of this month with first development tests getting underway in November.