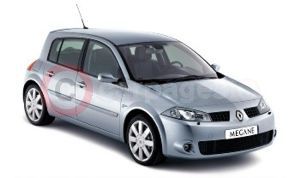 Ready To ‘Shake It’ In The Hot Hatch Market

The eagerly awaited Renaultsport version of the 2003 Car of the Year, the Renault Mégane, has been unveiled at the 2003 Frankfurt Motor Show. Available in both three-door Sport Hatch and five-door Hatch configurations, the Mégane Renaultsport 225 will be powered by a new 2.0 Turbo engine developed by Renaultsport outputting 225bhp to the front wheels.

Entering the highly competitive lower-medium hot hatch sector, the new Mégane Renaultsport 225 will challenge a wide range of rivals by offering the agility, speed and driving pleasure of a hot hatch combined with the comfort and refinement of a grand touring model.

All the comfort and safety features of New Mégane are also carried over to this sporting version, while it benefits from all the experience acquired during the development of the New Mégane programme.

The New Mégane Renaultsport 225 will go on sale in the first half of 2004.