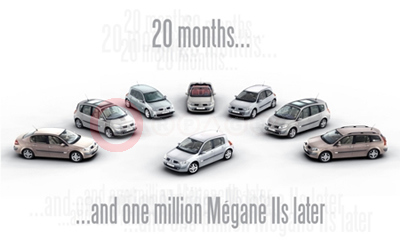 When Renault launched its New Megane II in 2002, there were many who described its unique style as 'one in a million' but now its definitely a valid claim as production figures top the one million mark after just 20 months on sale.

The success of Megane already far exceeded expectations by early 2003 by becoming the biggest selling model in Western Europe - and it still holds that coveted number one spot today with penetration of 4.7 %. Reaching the one million mark with the Megane II programme in such a short space of time is made even more impressive when compared to the Megane I which took 24 months to reach the same landmark figure and sold almost 4.7 million units over a period of seven years.

At the close of 2002, Megane Hatch and Sport Hatch paved the way for the renewal of Renault's offer in the C segment, the largest segment of the European passenger car market in volume terms. Voted "Car of the Year 2003", Megane has been acclaimed from the outset for its distinctive design, dynamic ride and handling with best-in-class safety features which led to it being awarded the first five star Euro NCAP crash test rating in its class.

The success of the Megane range has certainly been enhanced by the roll-out of seven different body versions in just 18 months. Megane Hatch and Sport Hatch launched at the end of 2002 followed by the Scénic, Sport Saloon, Sport Tourer and Coupé-Cabriolet in 2003. Early 2004 saw the launch of the seven-seater Grand Scénic, and finally the latest and most recent addition to the range is the Megane Renaultsport 225, which hit UK showrooms in May.

Based on a single platform - the Renault-Nissan Alliance C platform - the various Megane models are manufactured in three plants around the world: Palencia (Spain), Douai (France) and Bursa (Turkey).

From its launch in 2002, Megane came with a particularly comprehensive set of high performance engine units and the range continues to expand. In addition to the three petrol versions (1.4 16V, 1.6 16V and 2.0 16V) and two diesel versions (80hp 1.5 and 120hp 1.9 dCi), Megane Hatch and Sport Hatch feature a new version of the 1.5 dCi unit delivering 100hp (74kW). Scenic and Megane Coupé-Cabriolet are now equipped with a 165hp 2.0 T (120kW) petrol engine unit. This same engine also powers the Megane Renaultsport model in this case delivering 225hp and 300 Nm of torque.

Reaching the one million landmark figure is not the only achievement for Megane - the range has been acclaimed for its many safety features especially with their performance in independent Euro NCAP crash tests. Renault is the only manufacturer to have six cars with the maximum five star rating, and three of those are from the Megane range - Megane Hatch, Scénic and the recently awarded Megane Coupé-Cabriolet which is the safest cabriolet in its class.

With such an impressive list of achievements behind it and prices starting from just £11,090 on the road, the Megane range can certainly look forward to a bright future that will further reinforce its status as best selling car in Western Europe and ensure it enjoys an ongoing success story.