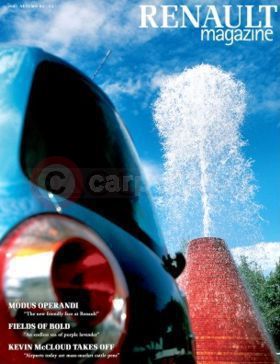 Renault UK has been raking in the awards recently, having accumulated a total of sixteen so far this year, in categories as diverse as: Best Diesel Supermini, Best Used MPV, Innovation of the Year, What Car? Safety Award, and What Van? magazine’s Van of the Year. But it’s not just the vehicles which are winning awards - the latest addition to Renault UK’s bulging trophy cabinet came in the form of the Most Effective Automotive Title for ‘The Renault Magazine’ at the Association of Publishing Agencies’ (APA) Customer Magazine Awards 2004.

Brooklands Publishing, publishers of The Renault Magazine were on hand at the awards ceremony held at the Dorchester Hotel on London’s Park Lane, to accept the award from the evening’s host, Jimmy Carr, the face of Channel 4 comedy.

Fighting off strong competition from the four other short listed automotive titles from DaimlerChrysler, Land Rover, Mazda and Toyota, Renault’s leading quarterly customer publication won due to its combination of interesting and relevant editorial, a design that reflected and enhanced the brand as well as the pre-requisite ‘wow’ factor.

Bringing all of these factors together led the judges to conclude that with its premium feel and reflection of Renault’s core brand values of "daring, visionary and warm", The Renault Magazine stood out as exemplary in its genre by being, "editorially engaging with excellent product placement and good writers, with the new (super A4) size and format the magazine is bucking the trend in customer magazines."

Commenting on the company’s latest award win, Philippe Talou-Derible, Managing Director, Renault UK, said, "Renault is consistently recognised as the most pioneering of car companies whether it is for our vehicles, marketing, motorsport or increasing Internationalisation around the world. The Renault Magazine follows this rule too and I’m delighted that the APA has acknowledged this.

Over the last few years, the magazine has had to reflect the changing Renault Brand image as daring cars such as the Mégane, Vel Satis and Scenic were launched and communicate on important subjects like safety whilst incorporating this within an interesting mix of lifestyle and travel articles for our customers who are not out and out car enthusiasts. It’s a difficult mix to achieve but one which, together with Brooklands Publishing, we are striving for".

Darren Styles, Managing Director, Brooklands Group, was equally delighted with The Renault’s Magazine award, "The twelve years that we have been associated with the Renault Magazine have seen the company undergo an incredible transformation with cars like Scenic, Mégane and Modus as just three examples which have invented and popularised whole new genres of vehicle. It has been a privilege to have a ringside seat and a challenge to reflect that degree of change in a magazine that has, simultaneously, to communicate the message of today while repositioning for tomorrow.

"The team and I at Brooklands Publishing have worked hard with our client over time to mould these diverse corporate requirements into a magazine that is, first and foremost, a strong, warm and inspiring read - and it's only by achieving this that we've been able to deliver the results in terms of effectiveness that have merited this award. And given that the Renault Magazine is the UK's longest-running customer title (having launched in 1962) it does rather feel that it's about time too..."

Customer magazines have become an integral part of loyalty-building programmes for many multinational companies in recent years, particularly with customer journals making up nine of the UK’s top ten magazines by ABC circulation. Renault UK recognised their value as a long-term relationship builder way ahead of the competition, launching the first ever customer magazine in any sector back in 1962 under the title ‘Ici Renault’.

Since then, with record UK car sales and its far-reaching editorial covering an array of lifestyle topics including food and drink, homes and gardens, design and technology, plus celebrity and travel features, it’s no surprise that The Renault Magazine has contributed to increased brand loyalty amongst Renault customers. As a measure of its continued success, with a current ABC readership of 220,399, it outstrips established coffee-table favourites like Elle, GQ and House & Garden. It just goes to show that it’s not just Renault’s cars which have that added Va Va Voom…