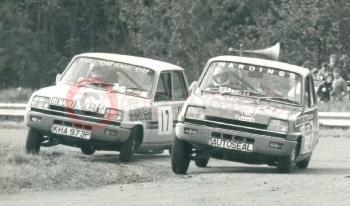 Renault UK Motorsport’s 30th anniversary celebrations in May will feature the supermini that was there at the start of the marque’s involvement in national racing – the Renault 5.

An incredible one-off race for Renault 5 TL, TS and GT Turbo race cars will take place at Thruxton Circuit in Hampshire on 30th May, alongside rounds of the Formula Renault UK Championship and ELF/BTE Lawline Renault Clio Cup.

An appeal for drivers and team members from the Renault 5 racing years has already reaped rewards with multiple champion Neil McGrath (Warrington, Cheshire) among those who have come forward to give their support to the event.

Organisers of the May celebration are keen to get in touch with Maggie Anderson, winner of Britain’s first-ever Renault 5 race at Brands Hatch, Kent, in 1974, along with as many other ex-Renault 5 competitors as possible to form a grid showcasing the early years of Renault UK’s motorsport programme.

But to make the ‘dream’ race a reality, Renault needs to locate sufficient Renault 5 race cars capable of being used on the circuit during the festival weekend of 29th/30th May.

Tim Jackson, who has headed Renault UK Motorsport since the mid-1980s, said: "To have a grid of Renault 5s at Thruxton would be amazing and something very special for those who used to compete in the various Renault 5 championships, for seasoned spectators and for those who were never lucky enough to see these tremendous little cars in action.

"The 30th anniversary of that first-ever Renault 5 TL race in the UK is a highly important occasion for Renault and we hope to make this special event a huge success with the help of those who made the Renault 5 championships so popular in the 1970s and 1980s."

Former competitors, team members and anyone else associated with the Renault 5 series’ are invited to contact Renault UK Championship Manager Simon North by email to simon.north@grovewood.co.uk