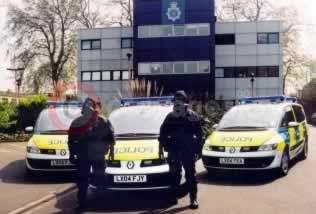 With the continued threat of terrorism looming over Britain, especially in regards to its transport infrastructure, the British Transport Police needed a solution to the instant action a terrorist threat requires. The answer? Three Renault Grand Espace 3.5 V6, fully liveried as specialist 24 hour response vehicles.

The British Transport Police is the national police service for Britain's railways covering the national railways, London Underground, Docklands Light Railways and a growing number of tram systems. The force deals with all crimes including violent offences covering 10,000 miles of track, 3,000 stations and depots, 400,000 tonnes of freight carried a day and are responsible for protecting a travelling population of 5.5 million per day plus more than 130,000 rail staff.

More than half those passengers are travelling in the London area and with the commuting public relying on them, the British Transport Police needed a fast response vehicle which could carry both people and equipment. And with the emphasis on providing a safe environment for rail passengers, what other vehicle could they choose than the Espace; the safest car ever having scored five stars for safety in independent Euro NCAP crash tests, achieving the highest score ever recorded.

The Grand Espaces chosen were the top of the range petrol engined 3.5 V6 version which with 245hp and 0-62 mph acceleration in only 8.1 seconds is the most powerful MPV available. They come complete with police markings, blue lights, sirens and specialised communications equipment, and contain custom racking to carry specialised anti-terrorist equipment such as Chemical Monitoring equipment, which was introduced after the Sarin nerve gas attack on the Tokyo Metro in 1995, and detects vapour in the air, portable X-ray equipment and personal radiation alarms.

The three Grand Espaces will act as Specialist Response Units to specifically cover central London, including 250 miles of London Underground track, which many suspect to be a prime target for a terrorist attack. More than 560 British Transport Police officers are employed in this area with the job of ensuring the safety of millions of commuters every day.

Assistant Chief Constable Paul Nicholas said; "We specifically chose Grand Espaces as they have proven to be reliable in service and popular with users. The vehicles also offered the capacity, both in volume and weight that was needed for the range of specialist equipment to be carried.

"In addition, when the Grand Espaces were evaluated by operational officers, they gave the performance and handling characteristics essential for a safe police vehicle. The cars' powerful 3.5 V6 engines were also important in helping us provide a fast response in answer to an incident. The Grand Espaces will certainly help us provide an enhanced 24 hour response capability to potential terrorism incidents on the rail and Underground network in the capital as well as contribute towards keeping the public and the UK's many rail staff safe."