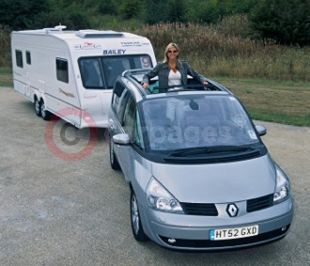 Renault is celebrating after the Grand Espace 3.0 dCi V6 Privilège Auto was named ‘Class Winner’ in the MPV category of the Caravan Club Towcar of the Year 2004 awards.

The Grand Espace 3.0 dCi V6 Privilège Auto beat off stiff competition to win the MPV category from the Peugeot 807 Executive SE 2.2 HDI, which took second place, and the Volkswagen Touran SE 2.0 TDI, which came in third.

Renault accepted the award from the ceremony’s special guest, sportswoman and television personality, Sharron Davies MBE, who also spent a great deal of time with the judges and the cars at the Millbrook track during the judging of the annual competition, which is now in its 21st year. There are 850,000 members of the Caravan Club who often base their next vehicle purchase on the awards, so it is a real bonus to be a winner.

After extensive testing, the judges concluded; "The Espace still sets the standards for the big people carriers. Tested with 3.0-litre turbodiesel engine and five-speed automatic transmission, it was fast, it handled well and showed all others how to hill start – except Renault’s Vel Satis, which has the same brilliant electronic handbrake."

Philippe Talou-Derible, Managing Director of Renault UK said; "We are delighted to have won this prestigious award, and particularly the MPV category with the fourth generation Grand Espace, which was launched earlier this year. It is a real honour to be recognised by the Caravan Club and proves the all round ability of the car."

The Renault Grand Espace 3.0 dCi V6 Privilège Auto costs £30,410 on the road and is on sale now. Standard features include climate control with separate driver/ passenger controls, heat reflecting windscreen and a tyre pressure monitor. This follows in the footsteps of the Vel Satis, which won the Executive Class last year.