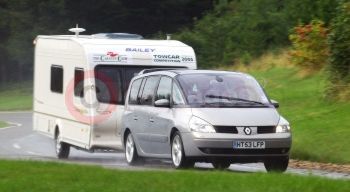 Renault is celebrating after the Grand Espace 3.0 dCi V6 Intiale Auto was named ‘Class Winner’ in the MPV category of the Caravan Club Towcar of the Year 2005 awards for the second consecutive year.

The Grand Espace 3.0 dCi V6 Initiale Auto once again beat off stiff competition to win the MPV category from the Mercedes Benz Viano CDI 2.2 Ambiente Long, which took second place, and the Mitsubishi Grandis Elegance 2.4 Auto, which came in third.

Renault accepted the award from the ceremony’s special guest, the pioneer behind Britain’s successful Land Speed Record project, Richard Noble OBE, who also spent a great deal of time with the judges and the cars at the Millbrook track during the judging of the annual competition, which is now in its 22nd year. The competition attracted 51 entries from 22 manufacturers and split into 10 categories according to body type.

The Caravan Club represents 850,000 caravan enthusiasts who often base their next vehicle purchase on the awards, and with 65% of them planning to change their cars in the next few months, it is a real bonus to be a winner.

After extensive testing, the judges concluded; "We accorded the Grand Espace top honours last year and nothing appeared this year to take away its crown. The big MPV was solid as a rock on our test track and the five-speed automatic transmission always seemed to have the right ratio."

Philippe Talou-Derible, Managing Director of Renault UK said; "We are delighted to have won this prestigious award, and particularly the MPV category with the Grand Espace. Espace celebrated its 20th anniversary this year so this award is a great extra present! It is a real honour to be recognised by the Caravan Club and proves the all round ability of the car."

The Renault Grand Espace 3.0 dCi V6 Intiale Auto costs £34,175 on the road and is on sale now. Standard features include climate control with separate driver/ passenger controls, a choice of luxurious interior trim and electrically adjustable front seats with memory for driver's seat and door mirrors.