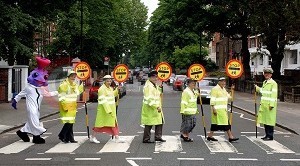 Renault UK has found the best ‘lollipop’ person in the country after running a competition inviting every UK primary school to nominate their school crossing patrol for the award in the year of the 50th anniversary of the crossing patrol service. The winner was announced at the Abbey Road zebra crossing made famous by the Beatles on the cover of their 1969 album.

Billy Fraser, 73, of Whitehouse Primary School, Co. Antrim was chosen from six regional winners as the national Renault ‘Safety Matters’ School Crossing Patrol of the Year by a panel of judges from Renault – the car maker that has become synonymous with safety – and LARSOA, the Local Authorities Road Safety Officers Association. The judges had their work cut out, sifting through hundreds of nominations from schools all over the UK. The winners were chosen for their professionalism and for their involvement in school activities outside the remit of their job, such as providing extra safety training.

“All entrants inspired huge affection and esteem among their charges.” said Mandy Hopkins, Public Relations Manager at Renault UK. “We chose Mr Fraser because of his great work and dedication and the fantastic nomination sent by his school. Every class in the school contributed to the entry, voting him top of the lollipops.”

In addition to the credibility of being named the best Crossing Patrol persons in the UK, all six won £500 worth of holiday vouchers for a well-deserved break of their choice. Every pupil who contributed to the winning nominations will receive a Renault ‘Safety Matters’ goody bag.

The crossing patrols were joined at Abbey Road by space alien Woosh, known to thousands of UK children as the star of Renault’s video, ‘The Adventures of Woosh”. The video forms part of Renault’s “Safety Matters” road safety teaching pack used by 15,000 UK primary schools.

The six regional winners were:

All schools that entered the competition will receive a certificate and a box of Celebrations courtesy of Masterfoods, as well as their entry to present to their school crossing patrol.