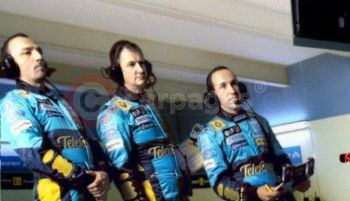 Renault has launched its first-ever international advertising campaign for Renault F1 Team, running throughout the 2004 Formula One season worldwide and hitting UK TV screens next month during the build up to the British Grand Prix in July.

The aim of the campaign is to raise awareness of the Renault brand as well as enforce its unquestionable passion for motor sport.

Although the technological finesse and performance of the Renault F1 Team RS24 car is assured given the Team's second place overall in the Constructors' Championship and two podium finishes so far this season, the advert chooses to focus on the human element behind the sport.

The audience is invited to 'feel' the passion, tension and emotions the Renault F1 Team drivers - Fernando Alonso and Jarno Trulli - face in every race. The physical toll on a driver can be immense, for example losing around three litres of water per race!

Every day people and members of the Renault F1 Team pit crew are featured in the advert 'feeling' the effects of a twisting chicane and g-force at top speeds of up to 190 mph. The advert culminates with a close up shot of Fernando Alonso putting on his usual display of spectacular driving around the twists and turns of a Formula One course.

Philippe Talou-Derible, Managing Director of Renault UK said; "The first-ever campaign for Renault F1 Team is an extremely exciting step for Renault and I look forward to the ad hitting UK screens throughout June and July in the run up to the British Grand Prix. With the Team performing so well this season, in line with its 2004 strategy, maintaining its second place position overall and with both drivers consistently scoring points, the time is definitely right to raise awareness of our successful participation in F1.

"F1 is a sport which inspires great passion amongst its fans and Renault is a brand which is known for its own passion in everything it undertakes whether it be motor sport, design or road safety. We wanted the focus of our first-ever ad campaign for Renault F1 Team to concentrate on the human aspects of the sport bringing first-hand experience of the thrills and excitement of F1 directly into the homes and hearts of our customers."