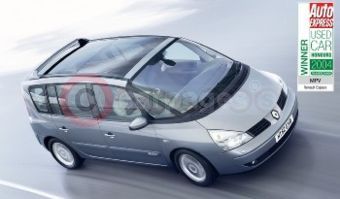 The latest Renault Espace introduced in 2003 has added yet another prize to its growing list of accolades by winning the Auto Express Used Car Honours MPV award 2004.

It was the first time the latest fourth generation Renault Espace was eligible to enter the Auto Express Used Car Honours awards and in its debut, it fought off stiff competition to scoop the top honour in the MPV category from the Seat Alhambra and Kia Sedona.

The team of Auto Express jurors describe the Espace as "a people carrier you can be proud to be seen in" and that its "combination of safety, equipment and good value pricing means the Espace is a pretty tough cookie to beat…The French MPV proves that it's possible to own both a people carrier and have a vehicle that makes the neighbours jealous."

Bob O'Reilly, Manager, Used Vehicle Operations for Renault who accepted the award commented; "It's a great honour to win the award for the MPV category for Renault Espace, and to win it the very first time it has been eligible to enter is even more satisfying.

"The latest Espace has won many new car awards but it's great to see it makes sense for a used car buyer too. I am equally thrilled with four other Renault vehicles picking up Commended honours too."