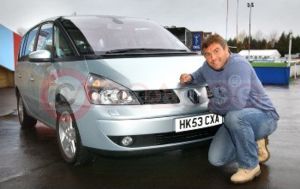 England Rugby stars, Jason Leonard and Lewis Moody, have something else to celebrate following England’s glorious win in Australia last Saturday. Within hours of landing back into the country on Tuesday morning, Jason and Lewis both drove away from the victory Press conference in their new Renaults. Jason picked up a new Renault Espace 2.0 Privilège Turbo Auto whilst Lewis is one of the first people in the UK to receive a new Mégane Coupé-Cabriolet 2.0 litre Dynamique – which only went on sale on the 19th November – courtesy of a vehicle sponsorship deal with Renault UK.

Crowned most capped international player in rugby history during the World Cup, Jason Leonard is no stranger to driving Renault cars having driven a variety of vehicles including a Renault Scénic and Laguna but now courtesy of this latest sponsorship deal will drive Renault’s flagship car worth £26,000 – itself a winner having recently won Best MPV trophy at the Scottish Car of the Year 2003 awards.

Lewis Moody had driven a selection of current models before heading off to Australia but there was only one choice for him from the Renault range – the new Mégane Coupé-Cabriolet which has only been on sale less than a week.

The Mégane Coupé-Cabriolet has the world’s first glass folding roof as standard which folds down in a class leading 22 seconds – about the same time it took to score the winning kick last Saturday – and has the strength of an entire Rugby team having been based on the class leading Euro NCAP five star safety rated Mégane Hatch.

So even though the French team were knocked out of the semi-finals, some of the winning team are relying on French power to get them around!