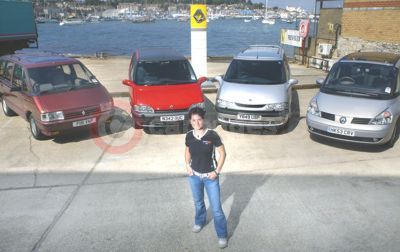 This summer is the twentieth anniversary of the class-leading Renault Espace first going on sale and as the Espace is the vehicle driven by round the world sailor Ellen MacArthur, she was on hand during Cowes Week to mark the occasion.

Renault is the official vehicle supplier to Offshore Challenges, the company set up by Ellen MacArthur to enable her to challenge world yachting records. Many of these records start in France involving the movement of huge amounts of equipment and the many people whom co-ordinate her record attempts. As such the three Espace’s, two Renault Master vans and one Renault Trafic van supplied to Offshore Challenges are getting plenty of use.

Since signing the sponsorship agreement with Renault last year Ellen has overseen the building of her new solo 75-foot trimaran B&Q built for the sole objective of breaking solo sailing records.

Originally conceived by Renault and its partner, Matra, the first Espace appeared in 1984 and was initially greeted with a combination of intrigue and scepticism as nothing like it had ever been seen before. Flying in the face of accepted wisdom, the Espace epitomised Renault’s desire to push the boundaries of conventional design and create a car that met the changing needs of a rapidly evolving society.

Many rivals have since tried to copy the Espace’s winning formula, but over four successive vehicle generations, the Espace has led the European large MPV market and is still the best-seller today. With each successive version, Renault has also sought to bring additional enhancements in terms of safety, driving pleasure and travelling comfort, to the point where today’s latest model is more than a match for any ‘conventional’ executive car.

Sales in the UK of Espace IV are up a huge 98% in the first six months of 2004 following the UK launch of Espace IV in February 2003 and its top placing by Euro NCAP as the safest car ever tested.

As well as winning over new customers, Espace also enjoys the highest loyalty rating in the segment: 75% in France and 66% in the rest of Europe.

With Espace, Renault created a whole new vehicle concept, which was successfully carried over to Twingo in 1992, Scenic in 1996, and Modus in 2004. Twingo, Scenic II and Espace IV all lead their markets segments in Western Europe.

The Renault Espace has been the leading vehicle of its kind since its inception, and after twenty years it shows absolutely no sign of relinquishing its supremacy in the increasingly competitive MPV market.