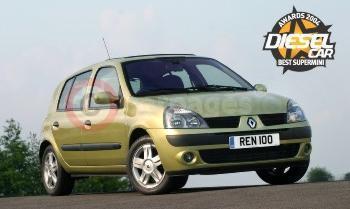 Diesel Car Magazine has chosen the Renault Clio 1.5 dCi 100 as Best Supermini in its Car of the Year Awards 2004. This year’s win is no mean feat, particularly as this is the third year in a row that the sporty Clio has won the coveted trophy - each time with a more powerful engine than the last. This flexible 1.5 dCi engine has helped the Clio significantly in achieving the milestone of 750,000 sales in the UK earlier this year.

Fighting off strong competition from the key contenders in this highly competitive category (Citroen C2, Fiat Punto, Ford Fiesta, Mini and Nissan Micra), the judges were impressed by the stylish Clio’s blend of class-leading economy, performance and sporty handling, not to mention the dCi 100’s refined ride and generous standard equipment levels.

Voting the Clio 1.5 dCi 100 as the Best Supermini category winner, the panel singled out the Clio’s latest 100hp engine for praise, including comments such as, "The arrival of this peppy 100hp model…marks another nail in the coffin for petrol hatchbacking…For those seeking ultimate oomph…this car’s highly respectable 148 lb ft of torque at 1,900rpm will spell instant conversion", and, "Add the economy potential of 66 mpg and CO2 emissions of just 113g/km and the warm feeling spreads quite rapidly into your pocket…"

Summing up the Clio dCi 100’s triumph, one of this year’s judges, Sue Baker, captured the nature of its win perfectly, "Characterful, ultra frugal and modestly priced with a reputation for low running costs, this budget diesel has a big heart."

Renault’s dCi common-rail diesel technology is leading the field in the UK – a fact recognised by the fact that this year’s honour from the diesel driver’s bible follows the success of the Clio dCi 65 and 80 versions which both won Diesel Car magazine’s supermini category in the same years that they were launched - 2002 and 2003. Notably, the judges were just as impressed with the Clio then as they are now, leading them to conclude at the time that, "…we just can’t think of a better, more rounded diesel supermini at the price", and, "the most desirable supermini package available today."

Commenting on the continued success of the Clio diesel range, Jeremy Townsend, Brand Manager, Clio, Renault UK, said, "The Clio consistently ranks among the best-selling small diesel cars in Europe and this award only serves to underline its continued appeal. With its sporty and economical engines, low running costs and high levels of comfort and practicality - all wrapped up in a fun, great value-for-money package - it’s no wonder the UK’s love affair with the Clio and its Va Va Voom is still so strong."

The 1.5 dCi 100 engine is available on three trim levels across the Clio’s Sport and Elegance Collections so that customers can choose between sport and luxury features on their cars: Dynamique, Privilège and Initiale, with prices starting at £11,200.

The Diesel Car Awards panel will no doubt be waiting to see if Modus - Renault’s eagerly anticipated super-spacious supermini, can follow in the footsteps of its ever-popular sibling when it arrives later this year with two diesel versions available from launch in September.