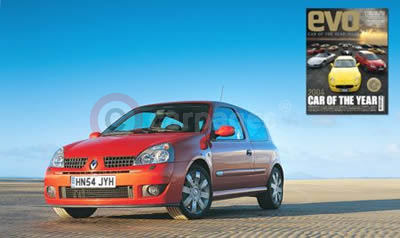 Not only did Clio fend off all of its direct competitors, it also managed the best lap time during the tests at a staggering 51.4 seconds, almost half a second ahead of its nearest challenger, the £20,000 Subaru Impreza WRX. The Clio Renaultsport 182 Cup is an impressive new addition to the performance car market since going on sale in September this year.

As well as hailing the Clio Renaultsport 182 Cup as ‘Britain’s Best Budget Performance Car’, Autocar also heaps even more praise on the car. "If the purpose of this test is simply to find the most fun car you can buy for under £20,000, then the Renault wins hands down, thank you and good night."

The Autocar judges also concluded; "Where it mattered, for raw driver thrills, the Renault blew us and its rivals away by such a clear margin it was hard to believe it was also the third-cheapest car of the group.

"You are totally captivated by it, drawn in by its frenetic energy and pace when you feel like going quickly, and you can go from A to B comfortably the rest of the time. As a package it is compellingly complete. You might consider paying a lot more than £13,800 for this kind of fun."