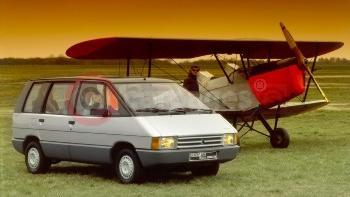 After four generations of the Renault Espace, this month marks its twentieth anniversary. The ground-breaking Espace, which started the MPV revolution back in the early Eighties, has also reached another major milestone with the one millionth example having just rolled off the production line in Sandouville, France.

Originally conceived by Renault and its partner, Matra, the first Espace appeared in 1984 and was initially greeted with a combination of intrigue and scepticism as nothing like it had ever been seen before. Flying in the face of accepted wisdom, the Espace epitomised Renault’s desire to push the boundaries of conventional design and create a car which met the changing needs of a rapidly evolving society.

Many rivals have since tried to copy the Espace’s winning formula, but over four successive vehicle generations, the Espace has led the European large MPV market and is still the best-seller today. With each successive version, Renault has also sought to bring additional enhancements in terms of safety, driving pleasure and travelling comfort, to the point where today’s latest model is more than a match for any ‘conventional’ executive car.

Espace’s roots can be traced back to late November 1979 when a prototype (P16) was trialled based on Renault's plans for a grand-touring saloon inspired by the passenger van, meanwhile Matra had plans for a similar vehicle. Espace as we know was conceived on 15th December 1982 when Matra and Renault joined forces on a second prototype codenamed P23. Renault took charge of product definition, design, powertrains, promotion and sale while Matra handled vehicle development and production.

Jacques Cheinisse, head of Renault's upmarket product range at the time, drew up the specifications that would define the main features of the Renault MPV concept: uncluttered flat floor for front-to-back mobility, five or seven independent seats (with two front swivelling seats), and bodywork made from composite material to keep vehicle weight down.

The name Espace (the French word for "space", in both its usual senses) fit the vehicle perfectly, and advertising material made much of the opportunities for wordplay, with frequent references to the vehicle's "out of this world" qualities.