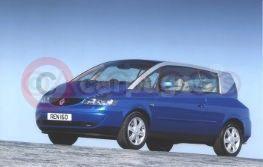 The French national football team may be out of the 2002 World Cup but CAR Magazine has chosen the Renault Avantime to be a key player in its own World XI line-up, making it the sole representative from the 1998 championship-winning country in CAR’s top 11.

"From supercars to cutting-edge saloons via ageless roadsters and stylised convertibles, its clear that a CAR World XI will be picked from as diverse a group of players as has ever graced the scene," comments CAR, and cars don’t come much more different than the Renault Avantime.

The unique Avantime brings some left-of-field qualities to the car world offering the alternative of a light, airy and roomy cabin, providing space for four adults to cruise across countries and continents in style and comfort, wrapped up in a two door bodyshell that is a cross between coupé, cabriolet and MPV.

Not only does Avantime offer another choice to the executive coupé customer, it will also catch the eye of buyers looking for a replacement for their 4x4, those who no longer need a top-of-the-range MPV, or executive saloon owners who still want to occasionally use the rear seats to carry friends and large amounts of luggage without having to resort to a traditional four-door saloon.

Bringing " … flamboyant and quirky motoring to the masses …", the Avantime moves CAR to comment that it " … feels like a true exotic – more so than something costing seven times the price." And unlike the football matches happening in Japan and Korea this month CAR comments "The Avantime demonstrates what the car industry has been lacking for some time: balls."

This is a 19-year+ news article, from our Renault archive, which dates back to the year 2000.

If in doubt check with your local Renault dealer as car prices and technical data will have changed since 2002.