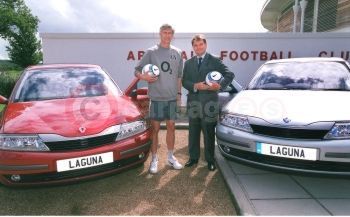 As if Arsenal Football Club were not riding the crest of a wave already at the start of the new 2004/05 Premiership season, there’s now further cause for celebration with the news that Renault UK is the Club’s new Official Car Supplier for the next two years.

In recent times, not only has Arsenal become the country’s most successful team, winning both the Premiership title and FA Cup twice in the past three seasons, but the heavily French-influenced team’s flowing and attacking football has been universally praised, even by the most ardent of opposition fans. And with the new partnership, Renault hopes to ensure the Club is as stylish on the road as it is on the pitch.

As part of the deal, Renault UK has supplied a comprehensive fleet for use by manager Arsène Wenger and a range of support staff based at Arsenal’s key three sites – Arsenal Stadium, Highbury; the Club’s Hertfordshire training ground; and their Youth Academy at Hale End in east London.

While Arsène Wenger will be able to travel in serene luxury between home and training ground in his top-of-the-range Vel Satis, other members of staff at Arsenal will benefit choosing from the fleet, which consists of Scenic, Laguna, Espace, and Vel Satis, plus Kangoo, Trafic and Master light commercials. Even the Club’s kit manager has not been forgotten, he gets a new Trafic van.

Commenting on the company’s latest commercial partnership, Philippe Talou-Derible, Managing Director, Renault UK said: "We’re delighted to be the Official Car Supplier to Arsenal, not only because of the strong French connection between the two organisations, but also due to the design and style our range of cars and vans will bring to the Club off the field. With Arsenal dominating English football and Renault continuing to post record UK sales, we look forward to seeing the partnership of two such successful organisations develop in the coming months."

Keith Edelman, Managing Director, Arsenal, said: "We’re very pleased to welcome Renault UK as Arsenal’s Official Car Supplier and are very much looking forward to building a successful partnership together. However, this will be more than just an Official Car Supplier relationship, as we will be organising many initiatives, offering wide ranging benefits to both parties."

Renault is already linked to Arsenal due to the highly successful ‘Va Va Voom’ Clio ads featuring striker Thierry Henry, but to kick-off the partnership the two parties have organised a range of marketing initiatives to raise awareness among the Club’s fan base and TV viewers, including stadium screen and pitchside advertising, coverage in Arsenal’s monthly fan magazine and matchday programmes and Renault’s quarterly customer magazine, plus an exclusive co-branded mobile phone text auction to own a new Renault Clio Extreme worth £8,500. Anyone wishing to enter the text bid auction should visit www.arsenalmobile.com for further details.

With Arsenal already starting the 2004/05 season in winning style, with maximum points and only a win or draw needed from their game against Blackburn Rovers on Wednesday night to set a new overall English record for remaining unbeaten over 43 consecutive matches, it seems the Club is already benefitting from extra "Va Va Voom". Flying Frenchman Thierry Henry has already been on the score sheet twice, in what promises to be an action-packed season.