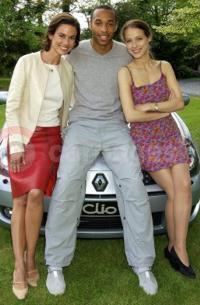 Renault Clio sales in the UK have hit the impressive figure of 750,000 after 13 years on sale. Clio is the fastest selling car in Renault’s 102-year history in the UK and last year recorded its highest place yet in the UK best-sellers chart at number five. With the recent launch of the 2004 range including the Clio Renaultsport 182 and dCi 100 the UK’s love affair with this little French fancy continues to go from strength to strength.

The Renault Clio first launched in 1991, replacing the ever-popular Renault 5. The new Clio encompassed all the refinement, specification and ride of a big car in a supermini for the first time. Billed as the ‘little big car’, the public were soon captivated by this chic and stylish new French car helped no doubt by a new advertising campaign featuring a farther and daughter called Nicole and Papa. During the seven years the campaign ran, eight instalments of the advertisements were broadcast culminating in the famous ‘wedding’ episode staring Vic Reeves and Bob Mortimer which broadcast on May 29th 1998, the launch date of the brand new Clio II.

Millions tuned in find out who Nicole’s mystery groom was and to hear only the third word to be used in seven years "Bob", with some fans even putting up posters saying ‘Don’t do it Nicole’ in the weeks leading up the wedding episode. French actress, Estelle Skornik played the part of Nicole to great success with a 1996 survey finding she was more recognised in the UK than then Prime Minister John Major, Bob Hoskins or Chris Evans! Fans of the long running ad were more than happy to see Nicole eventually not get married at all, leaving Vic Reeves standing at the alter whilst she drove away in the new 1998 Renault Clio with Bob Mortimer.

The success of the Renault Clio was evident, winning European Car of the Year at its launch in 1991 and consistently remaining in the top ten UK sales charts throughout the nineties. With the new shape car came a new, sexier attitude. Stunning French model and actress Hélène Mahieu took to the wheel as the face of Clio declaring to the world with a snap of her tape measure that ‘Size Matters’. The campaign ran for three years and provided the launch pad to one of today’s most recognised phrases, as she purred 'Va Va Voom' from our TV screens with the launch of the sport Clio Renaultsport 172. The Clio 172 redefined the hot hatch for the new century underlining the core Clio feature of driving pleasure which reached even greater heights in 2000 with the launch of the mad mid-engined Clio Renaultsport V6 with 230hp.