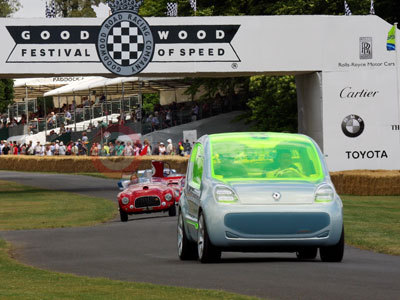 While a succession of high-powered Renault race cars thrilled the vast, 135,000-strong crowd at Silverstone during the World Series by Renault weekend, the second largest motorsport event in the UK, a futuristic electric car was generating quite a buzz of its own at the Goodwood Festival of Speed.

Over the three-day event, the Renault Z.E. (Zero Emission) Concept, which dazzled at the Paris Motor Show a few months ago, joined two other ultra-rare cars, Ondelios and a 1959 electric Dauphine, from the brand's Paris museum to showcase the French marque's green credentials.

Not just transported over the English Channel to sit idle in Renault's area of the Goodwood FoS-Tech Pavilion, the Kangoo be bop-based three-door also took to the hillclimb route, much to the delight of the awe-inspired onlookers.

As the only one of its kind, and worth around £2 million, the hand-built concept car navigated its way serenely around the route, providing a remarkable contrast to the vintage road and race cars around it. At one point on the route, close to Goodwood House, the outlandish Z.E. Concept, replete with its Acid Green windows and roof-mounted solar panels, joined a Jaguar XJ13 and Aston Martin DBR1 for arguably one of the most surreal car parade sights ever seen at the Goodwood Festival.