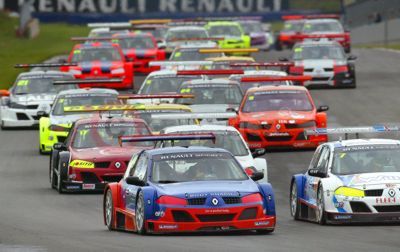 More motorsport fans will now be able to watch the high-octane action at Donington Park next month, when the World Series by Renault (WSR) arrives for a free two-day extravaganza.

Organisers have announced the awesome Formula Renault 3.5-litre single-seaters will now race around the longer, international version of the Leicestershire circuit - originally created for Formula One cars.

A massive 150,000 invitations have been distributed for the 10/11 September ticket-only event and the longer track means more room to spectate along the Melbourne Hairpin - as well as more racing action.

The Formula Renault 3.5 Championship sees 32 drivers competing in cars that are just one step away from Formula One. In only its first season, the series has been hailed as the new training ground for the world’s fastest drivers after some breathtaking performances from the likes of championship-leader Robert Kubica, who took his third 2005 victory on a drenched track at Germany the last round, and third-placed Australian, Will Power, whose committed racing has seen him win two races but come away empty-handed from four.

For Renault Mégane drivers, this meeting will be their first opportunity to see the most extreme version of Europe’s best-selling car racing door-to-door. The Eurocup Mégane Trophy sees more than 30 drivers battle for position in their mid-engined 330 horsepower race cars. The championship has provided some electrifying racing so far and is still wide open with leader Jan Heylen just 16 points ahead of second-place Renaud Derlot, despite winning five of the season’s eight races.

Eurocup Formula Renault 2.0 sees more than 30 drivers fighting to be named the best in Europe, including Michael Ammermüller who has driven an impeccable season so far to win five of the nine rounds. However Yann Clairay is mounting a strong campaign against Ammermüller’s dominance, winning once at Bilbao and finishing second four times since the start of the season.

The Formula Renault UK Championship with Michelin is the biggest and most successful junior championship in this country and has started the careers of Pedro de la Rosa, Antonio Pizzonia and F1 race-winner Kimi Raikkonen. The series normally travels with the British Touring Car Championship but is making this one-off break to support the Renault festival, along with the ELF Renault Clio Cup, which is the UK’s number one proving ground for drivers aiming to graduate into touring car racing.

But there is more to the WSR meeting than these ground-breaking championships.

Donington’s Renault festival gives motorists their first opportunity to see the New Clio, due on UK roads in October.

In addition, the amazing two-day meeting will include a funfair, racing car simulators, autograph sessions with famous drivers, a huge range of collectors’ cars, product and trade stands, aerobatic displays by the Renault-engined bi-planes of Tiger Airways as well as on-track displays from incredible cars.

Formula One star Martin Donnelly will complete parade laps in the Renault-powered Lotus 97T used by Ayrton Senna in 1985 to snatch his first GP victory at Estoril, Portugal. He will be driving alongside 10-times Grand Prix winner René Arnoux who will demonstrate Fernando Alonso’s 2004 race-winning R24 and the RE60 turbo-charged machine from 1985.

For further information and the latest news, see www.renaultsport.co.uk , or, during the meeting tune into Radio Renault on 107.5fm.