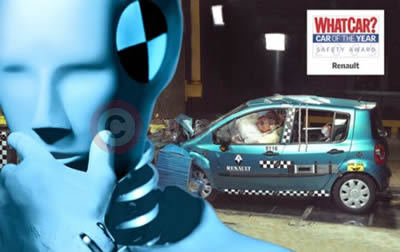 The Golden Globe winners have just been revealed and the Academy Awards are around the corner but even multiple winners De Niro, Hoffman and Spielberg have never dominated an award category in the way that Renault has at the annual What Car? magazine awards.

For the sixth time in seven years, Renault has won the What Car? Safety Award, in recognition of the car manufacturer’s safety expertise, and especially the five-star EuroNCAP crash test performances of the new, sassy supermini, Modus (the only five-star small car), and the sleek drop-top Megane Coupe-Cabriolet.

In fact the award category itself has only existed for seven years so the only year Renault has not won was in 2000 when the EuroNCAP organisation scooped the award themselves for developing the crash test programme. The EuroNCAP programme has provided independent evidence to the public of Renault’s efforts to build the safest cars on the road and its dominance of this area must have other car manufacturers (especially some German and Swedish ones) shedding more tears than a Gwyneth Paltrow acceptance speech.

He went on to praise the strides made by Renault over the last four years with its safety performance from a large family car to a deceptively spacious, but small one, "Its Laguna family car achieved the first ever five-star score back in 2001, but the Modus’ achievement is even more impressive because it is harder to protect the occupants of a small car in an accident and hence it’s the first small car to get five-stars."

Collecting the award was Dr Jean-Yves Le Coz, Renault Group’s Director of Road Safety Policy, the company’s key spokesperson on safety issues and a veteran of this field, with over 20 years experience in the study of accidentology and biomechanics.

He was naturally delighted to accept the prestigious award at the ceremony in London, and proudly said, "Safety is a prime concern not just for Renault but for each and every one of us. It is one of our company’s core values, and as such, Renault is anything but a crash test dummy when it comes to designing and making safe cars. Each year we invest over £70m in safety R&D, with a team of 600 engineers and technicians who are working to safeguard the future lives of car passengers."

With a trophy cabinet still bursting at the seams from the successes of 2004, with twenty award wins for its cars and vans, plus three more already in just the first three weeks of 2005 (Megane Renaultsport 225 - Daily Star’s Best Hot Hatch, Modus - Daily Express’ Best Small Car and Espace - Best MPV, Fleet Excellence Awards), it might just be worth the team Va Va Vooming it down to IKEA while the January sales are still on, to pick up another cabinet…