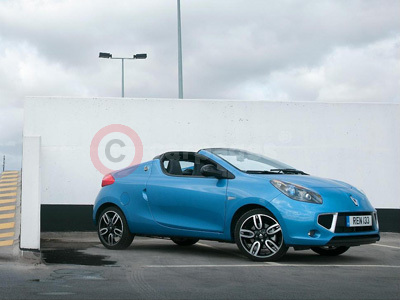 Muggy summer weather getting too much for you? If the air con has packed up in your office, or you just can't face another sweaty journey crammed inside the bus or train, weighed down by your suit, shirt and tie, Renault might have the answer, and a water-tight excuse - strip off.

As part of its latest innovative marketing campaign, to build awareness of its new two-seat Renault Wind Roadster, the French marque is hoping to be a breath of fresh air in the clammy weeks ahead. The contest, which has just begun, sees Renault inviting internet users to post video clips of themselves or anyone they know, trying to strip down to just a single layer of clothing in less than 12 seconds, the exact time it takes for the innovative roof to open and close on its latest model.

Of course, a responsible international company like Renault wouldn't expect entrants to dress up in their birthday suits. So, as far as the competition is concerned, to be eligible to win, entrants need to abide by the rule of 'stripping down from winter clothing to summer attire'. Contestants are free to interpret this however they wish, whether their initial outfit consists of full British-weather-busting trenchcoat, scarf, gloves and wellies, or simply a woollen hat teamed with a sun-kissed bikini.

Whether contestants film themselves from the comfort of their own homes, hide away in the photocopying room, or take a walk on the wild side by undressing in a public place, within reason, all entries will be accepted. Anyone looking to strip down to the bare essentials in an open-plan office, or in front of the in-laws, might wish to consider the possible ramifications first though. However, roping others in to take part, possibly in a group 'Flip Video Camcorder' party, could increase the likelihood of winning.

To be in with a chance of driving away in the Renault Wind Roadster, Renault's compact and stylish two-seater coupe-cabriolet, it's worth bearing in mind a few pointers. Firstly, the more successful entries will stand out from the crowd. They can be outlandish, feature unusual clothes (or a lack of them), interesting people or even an iconic landmark.

Secondly, choice of backdrop could be crucial. The more indecisive, could opt for filming themselves in front of one of the interactive screens which Renault will be using in London and Manchester, to countdown the seconds it takes to open or close Renault Wind Roadster's innovative electric roof. The screens will show a short clip of the car and its roof opening, followed by the words, "Now it's your turn". Entrants might also wish to consider racing the roof in real-life, by going to their nearest dealer and filming in front of one of their display cars.

Clips, unsurprisingly, lasting no longer than 12 seconds, can be uploaded directly into the site, or through YouTube with the tag "12secondstrip". The Renault microsite will allow visitors to see rival entries or simply browse for fun. For simple and effective navigation, it will also be split into several sections: clumsy, funny, sexy and the almost now obligatory, outtakes.

Speaking about the imminent launch, Renault UK's Marketing Director, Phil York, said, "With its clever roof system, Wind Roadster is unique in its class, so we wanted an ad campaign which broke away from the norm, yet mirrored its attention-grabbing style. We hope our latest initiative will capture the imagination of the British public, come rain or shine, and that like driving the car itself, they will have a lot of fun at the same time. We don't care if you're wearing granny knickers, a tatty old pair of Calvins, or even if your underwear isn't whiter than white, so as long as the video is fun and tasteful."

Renault Wind Images may not be UK specification cars. Colours and exterior and/or interior elements may differ from actual models.