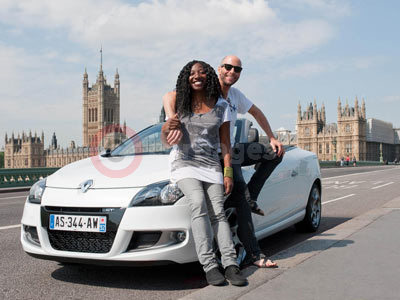 Teacher, Angela, 41 and salesperson, Richard, 38 (aka 'The A Team'), the dynamic duo representing the UK, are entrusted with the task of winning the road trip across Europe against seven other teams, not to mention maintaining national pride. Their four-week adventure started today as they set off from London at the wheel of the stylish Renault Megane Coupe-Cabriolet in sporty and striking GT guise.

With FIFA World Cup 2010 fever sweeping the nation, and patriotism at its peak, the timing could not be better for the road trip, which sees the UK team take on rivals from seven other key markets for the two new models on both the road and the internet.

Going wheel-to-wheel with the UK entry are adrenalin-fuelled pairs from Belgium, France, Germany, Italy, The Netherlands, Spain and Switzerland. All of the action for the eight European teams chosen by web users between April and May, is available online from today. The adventurers have until 9th July 2010 to cross Europe and accomplish nearly 100 challenges. More than 13 hours of programming will also go online at the site.

Web users can follow the intrepid adventurers and vote for their favourite team daily on the site. At the end of the game, the most popular team will win the "Very Good Trip", taking home the keys to both the new Renault Megane Coupe-Cabriolet and Renault Wind Roadster, plus the financial equivalent of a year's fuel and insurance.

Anyone can keep up to speed with the progress of the UK team, as well as their bitter rivals, at the click of a button:

As well as following the contestants online, fans can also keep tabs on Angela and Richard through several other mediums, Flickr, Facebook, Twitter and YouTube. Throughout their trials and tribulations, each team has to use each of these communication means to gain the support of an ever-growing fan base.