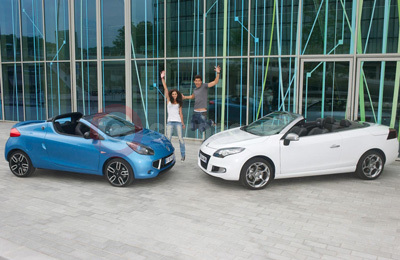 Emulating the success of their national football team on Sunday in South Africa, it was Spain again, this time in the form of Ana and Manuel, who won Renault's four-week road trip across Europe, "Very Good Trip". In winning the tough contest, the couple walked away with the keys to both a New Renault Megane Coupe-Cabriolet and a Renault Wind Roadster.

On 10th July 2010, the 16 contestants from the eight European participating countries (Belgium, France, Spain, Germany, Italy, Switzerland, The Netherlands and UK) were reunited in Paris to find out who would emerge triumphant at the end of "Very Good Trip", Renault's TV reality show shown on the web, which launched on 7th April 2010.

Each team had travelled almost 5,000 km and crossed four countries during the road trip, carrying out around 20 challenges, some physically demanding, some funny and all offbeat. At the end of the adventure, the clear winners were the Spanish team, Ana and Manuel, aged 25 and 26, both from Madrid, who managed to capture web users' imagination and attract their votes.

"Very Good Trip" was a huge success, proving the efficiency of Renault's fresh, new concept of a TV reality adventure broadcast on the web. Overall, almost 13 hours of programming showing the participants' exploits was broadcast on the dedicated web page.

Each pair of participants built up a whole community of fans through social networking sites (Facebook, Twitter, YouTube and Flick'r). In total, close to one million web users followed the candidates' adventure on the Very Good Trip website. The Facebook fan page attracted a highly active community of 8,000 fans.

Following the example of their national football team, World Cup champions in South Africa, the winners Ana and Manuel showed courage, fighting spirit and ingenious creativity to complete the challenges and win the adventure.

In order to win Very Good Trip, they not only needed the support and votes of internet users, but they also had to carry out weird and wonderful tasks. Ana and Manuel won 20 of the challenges, including making a 14-metre long scarf in the colours of their country - which gave them 5,000 extra points. Spain eventually finished ahead of Switzerland and France, who took second and third places on the podium.

In winning the contest, the Spanish team walked away with the keys to the two latest additions to the Renault range (plus the financial equivalent of a year's fuel and insurance): the new Renault Megane Coupe-Cabriolet and Renault Wind Roadster, two vehicles synonymous with travel, enjoyment and freedom.