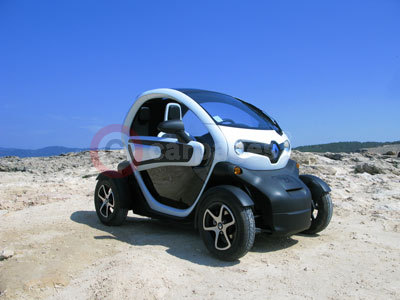 It is a common cliché that most cars look alike these days. It’s not really true any more, but here is one that certainly breaks the mould and looks absolutely nothing like anything else. Meet the Renault Twizy, a bold voyage into a brave new world of radical city electric runabouts. Is it a joke? No, Renault is deadly serious about its growing new range of electric vehicles, of which this is the smallest and most radical. It is the baby of a Renault electric family that includes the Fluence family saloon, ZOE mini hatchback and a Kangoo electric van, all of which are arriving on the market within the next 18 months or so.

Renault calls the Twizy its UDO – Unidentified Driving Object. Its styling is closer to that of a moon buggy or something from a Star Wars film than anything you would normally see on the road. The Twizy is a tandem two-seater and it takes its name from a contraction of Twin Easy. With its central seating, there is no need for Renault to bother about left or right-hand-drive versions for different parts of the world; this one little car fits all.

The Twizy is available in three trim levels: Urban, Colour and Technic. Prices are from £6,690 to £7,400. That is just for the car without the battery pack that runs it. You don’t buy that, you have to lease it, and the charge varies from £45 to £67 a month, depending on the contract you choose and your annual mileage use. Doors are extra too. In its standard version, the Twizy is open-sided and door-less. If you want a bit more around you, it means paying an extra £545 for a pair of pivot-opening 'scissor' doors, but they come window-less.

We question whether you can really call the brave and zany Twizy a car? It is more of a battery-powered, semi-covered quad-bike, halfway between a car and a motorbike. At its international launch on sunny Ibiza it seemed quite convincing, and it is certainly fun. But it might be a very different story on a rainy day in the London, Leeds or Liverpool. Young-minded commuters with a short daily journey could find one tempting, but we reckon the Twizy could do with a bit more weather-proofing.

It is worth noting the Twizy is covered by the same four-year warranty as all other Renaults, and when the battery pack wears out it is replaced free of charge under the lease scheme.

The diminutive Twizy is remarkably easy to drive, and its performance feels quite lively. It spurts away with an accompanying electric whirring noise, and feels as though it has plenty of life to propel you around. But the initial gusto is deceptive, and the performance levels off pretty soon with not much oomph remaining above 40 mph. It can cruise at nearly 50, but at the expense of a rapid decline in battery range. The claimed range is just over 60 miles, but that is rapidly reduced by cold weather, uphill ascents or an enthusiastic driving style.

The 6 kWh lithium ion battery pack is located under the floor of the Twizy and the AC electric motor and inverter are hidden away beneath the tail, driving the back wheels. You can hear the motor whirring away behind you as you drive. The light-weight little vehicle – just 450 kg – responds instantly to the throttle and zooms off in a lively manner. Don’t ask about a 0-62 mph acceleration time, though. It can’t reach that speed. For the technically-minded, the Twizy’s power output is a very modest 20bhp, and it packs a tiny punch of 42lb ft of torque.

This is a 9-year+ news article, from our Renault archive, which dates back to the year 2000.

If in doubt check with your local Renault dealer as car prices and technical data will have changed since 2012.

Renault Twizy Images may not be UK specification cars. Colours and exterior and/or interior elements may differ from actual models.