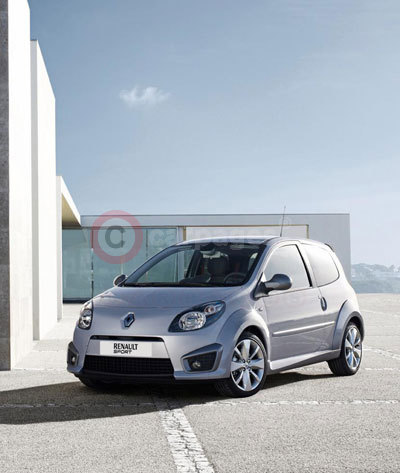 Renault's new, affordable, high-performance car slots into the Renaultsport range alongside its bigger sister cars, Clio and Mégane Renaultsport, and will be on sale in the UK in the autumn.

Twingo Renaultsport is a genuine hot hatch with looks to match and was designed to deliver both enjoyable road-holding and sports performance. Its efficient, balanced chassis has been combined with a punchy but flexible 133hp engine to form a package that is sure to appeal to all those who seek sporting sensations and driving pleasure during everyday motoring.

Renault has produced an affordable high-performance car which sits alongside Clio and Mégane Renaultsport in the Renaultsport range. Twingo Renaultsport's compact proportions and incisive, assertive styling are taken from the Twingo Concept show car which was unveiled at the 2006 Paris Show. Twingo's existing lines are underpinned by a more aggressive stance and the newcomer's sporty style is further emphasised by its wider front and rear wings, profiled sills and rear spoiler.

Twingo Renaultsport is the response of Renault Sport Technologies' experts to a two-pronged challenge, namely to deliver sports performance while at the same time ensuring that the new car is comfortable to use on a daily basis. Twingo Renaultsport’s chassis is both responsive and finely tuned to provide precise, balanced handling, while specific work on its new 133hp 1,598cc engine reveals a punchy temperament.

The rest of the world’s media and the public will get the chance to see the New Twingo Renaultsport close-up and in its full glory at the forthcoming Geneva Motor Show in March.