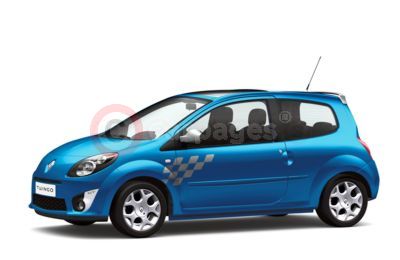 A longstanding player in the small car segment, Renault has sold more than 2.4 million Twingos since the model's launch in April 1993. Now for the first time UK drivers will be able to get behind the wheel of the ever-popular city car when New Twingo goes on sale in the UK in September 2007.

The launch of New Twingo forms part of Renault Commitment 2009 and the introduction of 26 new cars, including 13 aimed at conquering new markets. New Twingo boosts Renault's presence in the small car segment alongside Clio Campus, Clio III and Modus.

Thanks to its chassis derived from the B-segment and a powertrain range featuring the new TCE (Turbo Control Efficiency) 100hp petrol engine, which offers class-leading performance and fuel consumption, New Twingo's superior dynamics set it apart from its predecessor. New Twingo also targets a broader, more international clientele thanks to the distinctly dynamic styling of the GT version and the robust lines of the other versions, plus the availability for the first time of right-hand drive models for the British market.

New Twingo stands out as a further illustration of Renault's know-how in the domain of optimising cabin space and interior versatility, by making full use of the car’s compact dimensions (length: 3.60m). The interior is extremely modular thanks to its four independent sliding seats. Meanwhile, New Twingo's boot volume is the biggest in its segment, ranging from 165 to 285 litres (VDA) with all four seats in place and is extendable to a full 959 litres with a two-seater layout.

In keeping with the "my Twingo" philosophy, buyers can customise their new car thanks to a range of decorative decals for the exterior.

Safety was at the forefront of the New Twingo design team's priorities. Their work covers all aspects of this key area, from positive, predictable road-holding and accident prevention systems to occupant protection in case of impact. New Twingo's robust construction, braking and suspension performance, ergonomics and equipment from the next segment up put the car at the top end of the small city car segment in terms of safety and ensure its ability to pass even the most stringent crash tests. Numerous comfort and safety features not previously available for Twingo have also been introduced, including lateral airbags, automatic climate control, cruise control/speed limiter, height-adjustable steering wheel and automatic headlamp activation, etc.

New Twingo is nonetheless very affordable, both to buy and to run. CO2 emissions do not exceed 140g/km even with the most powerful engine and New Twingo makes a valuable contribution to the '120-140g/km of CO2' pledge of Renault Commitment 2009.

New Twingo is the first model to be renewed within the framework of Renault Commitment 2009 and had to meet an extremely exact brief in terms of quality and profitability. The new car will be produced at the Novo Mesto factory in Slovenia.