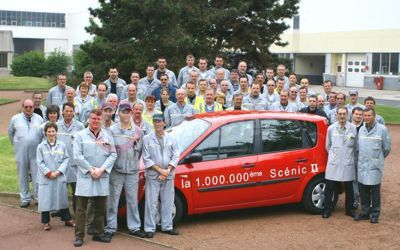 The one millionth Scenic II has just rolled off of the production line in Douai, France - less than three years since its launch. Its timing also offers cause for a double celebration, as 2006 represents the tenth anniversary of the launch of the original Megane Scenic - the car which trailblazed the compact-MPV sector in 1996 and has topped the European MPV sales charts every year for the last 10 years.

Hitting the one million mark is quite a feat for any modern car. Scenic I achieved it after four years, with virtually no competition for the first two years, which makes its successor’s achievement even more remarkable.

Originally launched as the third in a line of successful Renault monospace vehicles, Scenic was conceived to slot between Twingo and Espace, offering a previously unseen combination of a light and airy cabin combined with a high level of interior practicality and sizeable boot. Instantly hailed as an illustration of visionary design, the car took the market by storm as well as driving off with the European Car of the Year 1997 award.

Renault Scenic Images may not be UK specification cars. Colours and exterior and/or interior elements may differ from actual models.