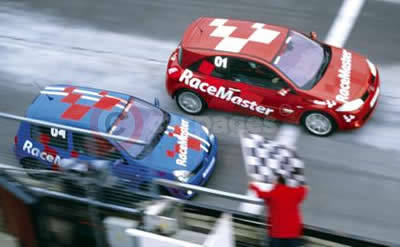 If you’ve ever dreamt of blasting off the starting grid and feeling the adrenalin pulsating through your veins as you take a sweeping hairpin, but always felt it was out of reach, then the reality might be a lot closer than you think, now that Renault is providing a fleet of high performance training cars for UK circuit owner, MotorSport Vision, run by ex-Formula One racing driver, Jonathan Palmer.

Over the coming weeks, Renault UK will be supplying nearly 50 cars, including 36 Renaultsport models, for the RaceMaster experience at two of the UK’s most renowned race tracks, Brands Hatch and Oulton Park, where the general public will receive full instruction on finding the quickest racing line in one of the performance Renaults before testing their newly acquired skills in a mini-Formula One style racing car.

As part of the deal, 18 Megane Renaultsport 225s will be taking on Brands Hatch while 18 Clio Renaultsport 182 Cups, recently called ‘Britain’s Best Budget Performance Car’ and ‘the Best Hot Hatch ever’ by top motoring titles, Autocar and Evo, will no doubt be able to cope admirably with the long fast straights and notoriously challenging corners of Oulton Park in Cheshire.

As a car marque with over 100 years of motorsport heritage and a highly-regarded range of Renaultsport high performance models, Renault was chosen as the ideal car supplier for race circuit driving schools, particularly as it already holds regular Renaultsport track days at several MotorSport Vision locations, giving owners and prospective customers the chance to enjoy the performance of the Renaultsport cars in safe conditions at the track.

In addition to the fleet of Renaultsport cars, Renault hasn’t neglected its commitment to safe driving and road safety either, as it will be supplying a Clio Renaultsport V6 255 as the Safety Car, Laguna Sport Tourer as Course Car and Espace V6 as Medical Car, not to mention 10 Clio 1.2 16V Extremes for MotorSport Vision’s Young Driver courses, where young people aged between 14 and 17 receive early basic driving lessons before getting their provisional licences.

Motorsport Vision Managing Director, Jonathan Palmer, is delighted with the new relationship. He said, “I am a big fan of the Renaultsport product, from extensive experience. We have used the Renault Clio Cup race cars on our Motorsport Sensation corporate events at Bedford Autodrome for three years and our fleet of fourteen cars has completed, incredibly, over one million flat-out miles! It’s no wonder our guests rave about it.”

“At MotorSport Vision, we are also committed to providing the highest standards of professionalism, presentation and image across all our race meetings and the inclusion of Renaultsport cars and models like the Espace V6, is the perfect combination to contribute to the achievement of this.”

Commenting on the latest high profile endorsement of its high performance cars, Renault UK’s Managing Director, Philippe Talou-Derible, said: “The UK is the largest market in the world for Renaultsport products, and having seen the critical acclaim which each of our three performance models received from the UK’s motoring press since their respective launches you can see why. Not only is it wonderful to see the glowing reputation of our Renaultsport cars spread beyond just enthusiasts and the media, with even racing drivers wanting to teach in them, it is also nice that the public will get the chance to experience the true, undiluted driving pleasure of our cars at their spiritual birthplace - the track.”

Having celebrated its thirtieth anniversary in UK motorsport last year, Renault is still heavily involved, from grassroots level with its Clio Cup and Formula Renault series, right through to the glitz and glamour of the Formula One World Championship, where its Renault F1 Team achieved its aim of third place in last season’s Constructors’ Championship with the R24 car.