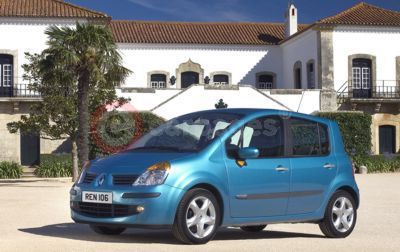 Fighting off strong competition in the hotly contested small car category, Ally Ballingall, President of the Association of Scottish Motoring Writers, commented on Modus’ win, "Intelligent packaging, big-car comfort and a five-star Euro NCAP safety rating are just some of the key attributes of our 2005 Scottish Small Car of the Year. Factor in the huge choice of engine and trim combinations matched to competitive prices and you have one of the most interesting small cars on the road. It may not follow the conventional supermini blueprint but that's partly what make our choice so appealing."

Receiving the award at the prestigious ceremony held at St. Andrews Bay Hotel, Mark Potter, Area Operations Manager, Scotland, Renault UK spoke of how well the car had been received by the Scottish Press since its launch last year and how their recognition would help the car to follow the success of its sister Renault models such the Clio and Mégane which have continued to dominate the top of the Scottish sales charts in recent years.

This latest award win comes on the back of Modus winning ‘Best Supermini’ in Diesel Car magazine’s Car of the Year Awards just a few months ago, while away from the media the car is proving to be as adept at attracting buyers as it is industry plaudits, with 13,500 of Renault’s chic small car sold in just a year since its launch last September.