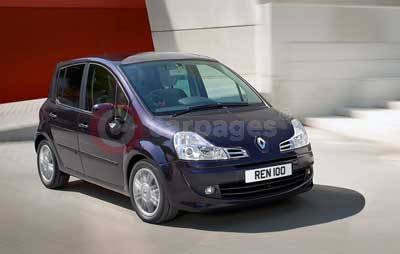 Renault has a reputation for breaking the mould with innovative new products, and when it comes to MPVs, Renault is the pioneer. With the launch of Grand Modus, Renault has used its expertise to create a versatile, stylish, practical and spacious MPV which has all it takes to become the main car in any household.

With an extra 16 centimetres in length (4,034mm), generous luggage space (up to 410 litres), and sliding 60:40 split or fold-flat rear bench, Grand Modus’ sheer versatility makes ideal for uses like family holidays or weekends with friends. The bright and airy interior, roominess enhance travelling comfort for all occupants. There are plenty of storage spaces too, making Grand Modus extremely practical. Grand Modus’ wheelbase increases by +93mm.

New Modus (3,784mm) combines compact dimensions and city car agility with an elegant new design and benchmark comfort. It is aimed at multi-car households in search of a small but practical car.

Both Grand Modus and New Modus are based on the B platform shared by the Renault-Nissan Alliance – a hallmark of comfort and efficiency. Both vehicles come with a wide range of environmentally-friendly engines that are high-performance and fuel-efficient. They include the much-acclaimed 1.2 TCE (Turbo Control Efficiency) 100 and the dCi 68, 86 and 106.

In addition to its outstanding CO2 emission performance, the new Modus family is 'eco-engineered', as demonstrated by its instrument panel that drew accolades in 2005 for using 4.5kg of recycled plastic. Five of the six powerplants available meet the standards of Renault’s eCO2environmental appellation.

The first-generation Modus set the bar as the first-ever small car to secure Euro NCAP’s top five-star safety rating. Based on the same platform, Grand Modus and New Modus gain the full benefit of Renault’s safety expertise. Both are packed with active and passive safety systems and features that include programmed deformation, ABS, ESP, up to six airbags, additional cornering lights, tyre-pressure monitoring and cruise control.

Modus first went on sale in 2004, and by October 2007, more than 395,000 units have been sold worldwide helping Renault to keep its place as a B-segment leader. It invested €110 million in Grand Modus and New Modus, manufactured exclusively at Valladolid in Spain. One B-segment customer in six buys an MPV, which accounted for 17% of the segment’s sales in 2006, equivalent to 4.3% of all passenger cars sold in Europe.

Grand Modus’ overall length of 4,034mm and wheelbase of 2,575mm, the new model features expressive looks with the large glazed surface area accentuating the sensation of space when sitting in the car. New quarter-lights in the C-Pillar also increase the glazed area.

Grand Modus features one of the most generous boot volumes of its category (410 litres) and represents a gain in this area of practically 50% over Modus (+ 136 litres).

Flat-folding the rear seat yields boot space of up to 1,454 dm3 (an extra 171 litres) and a capacity to carry loads of up to 1,278mm in length. Extensive work has been carried out to ensure this result, including a longer rear overhang (by 118m over the first-generation Modus). The low 605mm loading sill which makes it easier to load heavy bulky items. The contents of the boot are protected from prying eyes by a supplementary parcel shelf and special awning that adjusts to match all rear seat positions.

New Modus offers a boot volume of up to 293 litres (+19 litres compared to current Modus) and 1,302dm3 when the rear bench seat is folded flat. Generous roof clearance of 1,021mm at the front and 900mm at the rear seat caters for all passengers.

New Modus and Grand Modus’ user-friendly driving position combines the advantages of a saloon with those of an MPV and features centrally-positioned instruments that are easy to read for driver and all passengers.

A large number of storage spaces are within easy reach of passengers, including under-floor lockers, an 11-litre glove compartment, drawers and the ‘Stay-Put’ system built into the front passenger seat cushion.

Functional aviation style storage and new fold-down tables incorporated into the back of the front seats are available as a £150 option pack on Grand Modus. The overhead storage is within easy reach of the driver, and consists of two compartments which open at different angles 80° at the front, 60° at the rear – to make it easier for all occupants to access. The front compartment has a capacity of 2.8 litres, the rear one three litres. A built-in mechanism stops objects from falling out in the event of emergency braking.

Grand Modus and Modus’ settings enhance steering precision and manoeuvrability in city environments. New Modus has a turning circle of up to 10.4 metres between kerbs, while for Grand Modus, the turning circle is up to 10.7 metres.

Their chassis are derived from the original Modus and combine steering precision with a powerful capacity to absorb vibration and noise.

The front suspension uses MacPherson geometry with a rectangular lower arm which separates lateral and longitudinal forces. It is fixed on an isolated subframe which also contributes to comfort by filtering out vibration. The rear suspension is a programmed deflection torsion beam system with coil springs. The flexible cross-beam profile incorporates a 21mm anti-roll bar for optimum control of body roll. The vertical dampers and long suspension travel ensure rigorously precise yet comfortable handling.

Renault’s engineers tuned the Grand Modus dampers differently to those of New Modus with a configuration that can carry greater weight while maintaining an excellent balance between travelling comfort and road-holding performance.

Renault launched its eCO2line of vehicles earlier this year, and, with the exception of the 111hp 1.6 16V engine, all New modus and Grand Modus powerplants comply with the requirements.

To qualify for the Renault eCO2appellation, vehicles must comply with the following criteria:
- They must either emit less than 140g of CO2 per km or else run on biofuels.
- They must be manufactured in ISO 14001-certified factories.
- They must be 95% end-of-life reusable and contain at least 5% of plastics sourced from recycling.

All New Modus and Grand Modus are designed to ensure that 95% of their mass are recyclable. Some interior features and dashboards are made from recycled plastics, which account for 7% of all plastics used in both vehicles. Renault’s eco-engineered Modus dashboard uses 4.5kg of recycled plastic.

Regarding noise levels, Grand Modus and New Modus benefit from the progress achieved on the original Modus. Noise reduction is factored into the design stage by digitizing and computing vibration and acoustics. Both vehicles have cut noise levels by 50% to 71dBA – 3dBA lower than stipulated by European regulations.

New Modus and Grand Modus are both available in two trims, Expression and the ever-popular Dynamique.

Insurance groups are still to be confirmed, but are expected to be competitive.