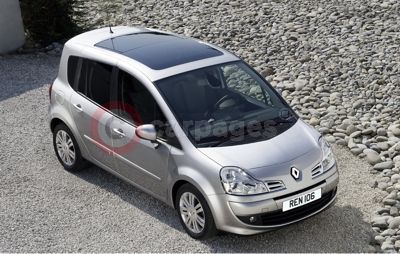 Grand Modus features harmonious, distinctive looks that elegantly exploit its longer wheelbase (+93mm) and larger quarter-lights, while its overall length of 4,034mm ensures that it has all the benefits of an MPV. Its boot is amongst the biggest of its category (410 litres VDA) and its three-seat, sliding 60-40 split-folding rear seat, plus its bright, functional cabin and plethora of smart storage spaces permit Grand Modus to pave the way for a host of family uses.

New Modus (3,874mm) combines compact dimensions and city car agility with an elegant new design and benchmark comfort. Grand Modus and New Modus will be produced at Valladolid, Spain, and will go on sale from February 2008.

Renault has put all its expertise as a pioneer of the MPV into Grand Modus. With an overall length of 4,034mm, a wheelbase of 2,575mm, the new model features expressive, appealing looks in keeping with Renault's approach to the MPV. The large glazed surface area accentuates the sensation of space when sitting inside the car. Grand Modus’ user-friendly driving position combines the advantages of a saloon with those of an MPV and features centrally-positioned instruments that are easy to read for driver and all passengers.

The emphasis on comfort and practicality

Grand Modus features one of the most generous boot volumes of its category (410 litres VDA) and represents a gain in this area of practically 50% over Modus (+136litres). Its modular interior layout is simple to transform thanks to its easy-to-use, sliding 60-40 split-folding rear seat, which enables Grand Modus to pave the way for a host of new uses. Attention has also been paid to passenger comfort thanks to its generous cabin space. A large number of storage spaces are within easy reach of passengers, including under-floor lockers, drawers, aviation-style storage and the ‘Stay Put’ system built into the front passenger seat cushion. Last but by no means least, the availability of top-performing, fuel-efficient powerplants ensures that Grand Modus has all the credentials to become a household's main car.

New Modus' compact dimensions (length: 3,873mm) and city car agility position New Modus as an ingenious and complementary alternative to the traditional city car. This mini MPV is aimed at customers looking for a vehicle with a high driving position and an effective compromise between exterior dimensions and cabin space. New Modus features elegant new lines and continues to stand out as a benchmark in terms of comfort and practicality, two areas that have made the model so popular with existing Modus owners.

Grand Modus and New Modus are based on the Renault- and Nissan-shared B platform, and will go on sale in February 2008.